No one should have to choose between food, paying their rent or going to the doctor. In Ohio, over 1.69 million people struggle with hunger and uncertainty about where their next meal is coming from. More than half a million of them are children. Last week, the Trump Administration finalized a new rule that will increase hunger across Ohio and the nation.

People who can’t afford enough food live under incredible stress. People who get enough healthy food to eat have better health and are more likely to have stability and security. That’s why the Supplemental Nutrition Assistance Program (SNAP, formerly known as food stamps) is so critical. SNAP makes sure children, families and low-wage workers don’t go hungry. In 2017, SNAP lifted 3.4 million people out of poverty, including 1.5 million children.

SNAP requires program participants between 18 and 49, who don’t have children and don’t have any disabilities, to spend at least 20 hours a week working or participating in job training or a work-related activity. If these adults don’t meet that requirement, they can only access SNAP for three months over a three-year timespan.

Before the new federal rule, state governments could request the federal government waive the time limit in areas with high unemployment or a lack of job opportunities. Ohio recently requested and received a waiver for 42 of our 88 counties, including Cuyahoga, Summit, Stark, Lucas and Mahoning counties and most of Ohio’s counties in Appalachia. The waiver meant that Ohioans in these counties could remain on SNAP after three months even if they didn’t meet the work requirement.

The new rule, which goes into effect on April 1, 2020, means that thousands of Ohioans will lose critical food assistance. Under the new guidelines, only Jefferson, Monroe and Noble Counties will be eligible for the time limit waiver.

The vast majority of SNAP participants who can work do. Unfortunately, many employers in Ohio’s low-wage job market don’t pay enough to cover a family’s basic needs. Six of Ohio’s 10 most common jobs pay too little to feed a family of three without the support of SNAP or a local food pantry. As the cost of food, housing, child care and health care continue to rise, more low-wage workers need support from SNAP to make ends meet.

Taking food away from people who are struggling to get by makes it harder for them to work or to find a job. The Trump administration’s new rule will make America hungrier.

This rule change is part of a larger campaign against our neighbors who experience hunger and poverty. Over the past year, the United States Department of Agriculture (USDA) has proposed three rules that would make it harder for people to get food. The Urban Institute estimates that if all three rule changes were in effect, 3.7 million would lose access to food assistance and the economy would take a $4.2 billion annual hit when SNAP participants stopped spending at grocery stores and corner stores across the nation. They estimate the combined changes would impact 81,000 Ohioans and take $173.8 million out of Ohio’s economy.

The war on the hungry is being waged in the Ohio Statehouse as well. Ohio lawmakers have proposed several pieces of legislation, including Senate Bill 165, House Bill 200 and House Bill 58, that would leave more Ohioans hungry.

Food is not a luxury item that only some people deserve. It is a basic human need. Policies that make it harder for people to access food and nutrition assistance are not only misguided and bad for the economy, they are cruel. 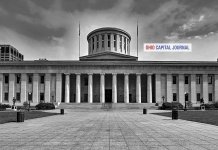 Celebrating one year of the Ohio Capital Journal