This is the hardest time of year for Charles “Chip” Jenkins. The holiday season makes him think of his son, Alex.

“I used to enjoy Christmas,” the Medina County native said, his voice drifting off. “But now? It’s just different.”

Alex died of an overdose five years ago at the age of 26. Jenkins now advocates for his son and other Ohioans suffering from addiction. He wants treatment options instead of incarceration. He wants offenders to have a chance at a productive life instead of being stigmatized the way Alex once was.

That is the ostensible goal of Senate Bill 3, a comprehensive effort to reform Ohio’s criminal sentencing laws. The bill would reclassify possession of illicit drugs for personal use as misdemeanors rather than felonies. It would empower drug court judges to guide those convicted to treatment programs rather than to prison for a perceived moral failing.

While considered a priority piece of legislation, it has yet to clear the Ohio Senate after 10 months of committee consideration. SB3 has some initial bipartisan support, with its primary sponsors being Republican John Eklund of Munson Twp. and Democrat Sean O’Brien of Bazetta. There have been endorsements from an array of groups, from the American Civil Liberties Union of Ohio to the right-leaning Buckeye Institute.

Law enforcement groups, however, remain in staunch opposition. The Ohio Prosecuting Attorneys Association and the Buckeye Sheriffs Association are among the groups that have testified against the bill, arguing that it weakens the state’s drug laws and will overwhelm the municipal court system.

Advocates hope a fresh push heading into 2020 will get the bill moving again.

For Chip Jenkins, it’s only about preventing other Ohio families from the tragedy his experienced in 2015.

The criminal justice system failed Alex Jenkins, that his father is certain.

Alex was a psychology student at the University of Akron, but suffered from addiction and “uncontrollable anxiety,” his father recalled. He was eventually charged with a drug-related felony in Cuyahoga County.

Part of the felony sentencing, Chip Jenkins said, was conditioned on him getting rehabilitative treatment in Michigan. Alex did so and returned “a new man,” his father said.

Alex then tried to get a job at a local dollar store. His criminal record surfaced during a background check.

Jenkins still is not sure how this was possible, as the family’s understanding was the felony conviction would be dropped upon Alex completing the treatment program. He guesses it was a court’s clerical error that kept the conviction, or perhaps a simple internet search uncovered it.

Either way, Alex was rejected for the job because of the conviction.

“Here is someone ready to join society,” Jenkins said, “and he was unable to do it because of a felony conviction. And it crushed him.”

The drug use returned. Jenkins said the family did everything they could to help; he even began taking nursing classes, hoping to better comprehend the nature of addiction.

At one point, Jenkins asked his son how he could continue doing drugs knowing it might someday kill him.

“He said, ‘we just don’t think of it that way,’” Jenkins remembered. He realized then that if death is not enough to deter many suffering from addiction, harsh criminal sentences are unlikely to either.

Alex died of a fatal overdose on Jan. 19, 2015. He left behind his parents and a sister, Kierstin.

Had SB 3 been in place to prevent Alex from having the felony conviction around his neck, Jenkins  believes his son would be alive today.

The father decided becoming an advocate for sentencing reform efforts like SB 3 would do the most good ⁠— for Alex, for his family and for the whole state.

A judge’s change of heart

Judge Larry A. Jones was not always a reformist.

Back in the 1970s, as a young assistant prosecutor, he didn’t have much sympathy for those tried for drug crimes. If users wanted to stay out of prison, Jones believed, all they had to do was give up drugs. Under that worldview, addiction is not a condition — it’s a choice.

Now, Jones realizes, that was an “oversimplification of a very complex problem.”

That widely-held philosophy has led to decades of mass incarceration, he now argues. It has not made communities safer. In fact, he now says, society is worse off because of the deep ramifications that criminal sentencing laws have on offenders and their families.

Jones became a Cleveland Municipal Court judge and presided over a drug court for about a decade, an experience that reshaped his entire legal perspective. Since 2008 he has served on the 8th District Court of Appeals in his native Cuyahoga County.

He too has become an advocate for reform efforts like SB 3, saying its passage would afford offenders a chance to live a full life.

There are financial arguments as well; Jones points out that it would likely cheaper to provide drug treatment to someone than to incarcerate them.

It costs well over $27,000 per year to house each inmate, according to the Ohio Department of Rehabilitation and Correction.

With the total number of inmates nearing 50,000, the state spent $1.45 billion in Fiscal Year 2019 on adult incarceration.

A common metaphor used by opponents of SB 3 is the classic “carrot or stick” approach to law enforcement.

Vic Vigluicci, president of the Ohio Prosecuting Attorneys Association, outlined the stick point of view in testimony to the Senate Judiciary Committee. He said that judges “need the discretion and flexibility to fashion the appropriate penalty to incentivize recovery.”

“Addiction to drugs is a powerful thing,” he said. “The incentive to break that addiction must be equally or more powerful. The possibility of a felony conviction with all of its consequences must be a possibility as part of that incentive.”

Warren County Sheriff Larry Sims, who has been active in the state’s Opiate Task Force, gave similar arguments in testimony on behalf of the Buckeye Sheriffs’ Association.

“Now is not the time to be reducing the possible penalties by changing Ohio’s drug laws,” he said. “There needs to be significant consequences for those that choose not to seek help.”

As Chip Jenkins pointed out in his own testimony earlier this year, those consequences can be costly even for those who do seek help.

“People suffering from addiction like my son Alex should not be branded with a scarlet ‘F’ and saddled with a felony for life,” Jenkins told legislators.

Jones acknowledged SB 3 is not the “total answer,” and that there are still aspects to criminal sentencing reform that need to be worked out. In responding to the worry that drug courts and municipal courts will be overwhelmed, he suggested funds could be reinvested from common pleas courts that now handle the many felony drug possession cases around the state.

Instead of focusing on the road blocks and barriers to change, the judge said, opponents should be working with supporters to find a way to make this positive change happen to better society.

The Alliance for Safety and Justice, a national organization working on reform projects like this one in Ohio, is also a proponent of SB 3 and helped organize a recent press conference featuring Jones and Jenkins.

Shakyra Diaz, the group’s director in Ohio, noted the additional effort on House Bill 1, which passed the Ohio House in June and is under consideration by the Senate Judiciary Committee.

HB 1 would broaden the use of “intervention in lieu of conviction” in the courts and would allow more offenders to have their criminal records sealed.

Diaz noted that SB 3, in contrast, is meant to work on the “front end” of the criminal justice system — to prevent offenders from getting stuck in a “cycle of incarceration.” It has been a long road already for SB 3. Legislative progress was muddled in recent weeks when the Judiciary Committee added an amendment to mandate stricter penalties for drug offenses committed within 1,000 feet of an addiction treatment center. After groups like the ACLU of Ohio rescinded their support, the amendment was swiftly removed.

As for its prospects in the overall Senate and eventually the House, advocates like Diaz and Jones say the plan is to keep making the case that reform is necessary.

They point to the fact that Ohio has the second-highest rate of drug overdose deaths in the whole country. They highlight the expensive prison system; the effectiveness of drug courts; the need to help Ohioans like Alex Jenkins to give them a chance at a quality life.

That’s why Chip Jenkin says he will continue to fight for progress.

“I need to help make change.” 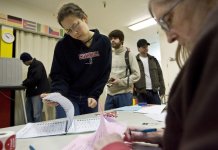