The direction of an unheralded, but important agency tasked with regulating Ohio’s utility services may be determined by the upcoming selection of a new commissioner.

Meanwhile, another agency which serves as an advocate for Ohio utility consumers wants a more transparent process by which commissioners are picked.

The Public Utilities Commission of Ohio is made up of five commissioners serving five-year terms. One of the seats begins a new term this April, and PUCO is accepting applications through Jan. 9.

Why PUCO is important

PUCO regulates the public utility services throughout the state, from electricity to water and telephone lines. This includes establishing new area codes and deciding if energy companies can impose a rate hike on consumers.

In some cases, a PUCO decision can directly affect Ohioans’ pocketbooks.

Several years ago, for example, PUCO approved a new fee imposed by FirstEnergy on consumers toward modernizing its system. However, the Ohio Supreme Court later struck down the fee because there were no actual requirements that FirstEnergy spend the additional money on investing in improvements.

FirstEnergy was allowed to keep most of what it had collected up until the fee was struck down, Cleveland.com reported, even though the fee was determined to have been improperly imposed.

The PUCO Nominating Council is responsible for screening candidates to the open commissioner seat.

The 12-member panel reviews all the applications and picks a select few to be interviewed. From there, the panel gives a list of four finalists to the governor, who then has 30 days to appoint a commissioner or request additional choices. A commissioner must finally be confirmed by the Ohio Senate.

No more than three commissioners can be affiliated with any one political party, but Republicans may come to control the commission. The current make-up includes two Republicans, a Democrat and two independents. It is the Democrat (Lawrence Friedeman) whose term is expiring. He can be reappointed to a new term, or DeWine could select a third Republican for the commission instead. The two independents were picked by DeWine and his predecessor, Republican John Kasich.

State law determines the members of the PUCO Nominating Council, which features various leaders of other state agencies such as the Accountancy Board of Ohio and the Ohio Consumers’ Counsel (OCC).

It is the president of the latter entity, Bruce Weston, who takes issue with the way PUCO commissioners are chosen.

OCC represents Ohioans in proceedings before PUCO, the courts and the Ohio General Assembly.

Commissioner applicants are not allowed to be currently employed by a public utility company regulated by PUCO, nor can they hold stocks/bonds of a regulated utility.

In a news release, Weston pointed out that several commissioners have previous experience representing utilities. Lawrence Friedeman was once a vice president of regulatory affairs and compliance at Dublin-based IGS Energy, while Chairman Sam Randazzo and Daniel Conway spent decades as lawyers who represented utility companies.

“Former utility representatives should not be appointed to regulate utilities,” Weston said in a statement.

Candidates must also have at least three years of experience in one of a number of provided subjects, such as economics, law, finance and environmental studies. OCC wants to see “consumer-oriented backgrounds” such as social work be added to the list, and is calling for a new rule requiring that one PUCO commissioner have experience as a consumer representative.

OCC wants there to be a new website naming the 12-member Nominating Council, including biographies that detail if they too have worked for industries that PUCO regulates. (The existing page on the PUCO website indicates the mandated positions on the Council, but does not identify the current members.) This website could also include applicants’ information and biographies, OCC suggests.

(Correction: An original version of this story identified Ohio Consumers’ Counsel’s president, Bruce Weston as being on the PUCO Nominating Council. It is OCC’s governing board chairman, Michael Watkins, who is a member of the Nominating Council.) 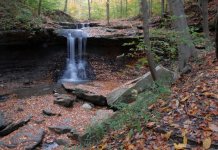 Visitors flock to national parks after Trump waives fees. Is that safe?