Experts and election advocates in Ohio are seeing the positives in including a judicial candidate’s party affiliation on a general election ballot, something a new Ohio House Bill proposes to do.

Late last month, House Bill 460 was introduced, which would allow judges to include their political party on the ballot, in a change from previous general elections, when they’ve been included on non-partisan ballots.

In primary elections, however, judges are already permitted to include their political party.

State Rep. Stephen Hambley, R-Brunswick, one of the bill’s sponsors, cited research in introducing the bill that said half of voters chose not to pick a judicial candidate because of a lack of information.

Ohio State University constitutional law professor Dr. Daniel Tokaji, who studies voting rights and election law, said while Ohio’s system of electing judges isn’t at all ideal, adding this information to ballots could be a positive.

“There is a risk that it’ll make judicial elections more partisan, but we’re kidding ourselves if we think they’re otherwise,” Tokaji told the Capital Journal. “The truth is (adding a party affiliation is) not a bad indication of what kind of judge you’re going to get.”

Tokaji said voters are inherently partisan, and so are judges, so knowing where they stand politically can reveal information about their ideologies as judges. Plus, with the political affiliation possibly on the primary election ballot and judges campaigning freely on their perspective of the law, merely adding that information to the general election ballots doesn’t change much.

“We have partisan judicial elections in Ohio, we just don’t admit it,” Tokaji said.

The Ohio Fair Courts Alliance, a network of groups promoting diversity and equity within the justice system, hasn’t taken a formal position on HB 460, but support the concept of the bill, according to Camille Wimbish, coordinator for the Ohio Fair Elections Network and election administration director for Ohio Voice.

“Judges impact nearly every aspect of our daily lives, and yet voters often select judicial candidates based on name recognition or skip voting for judges altogether,” Wimbish wrote in an email to the Capital Journal.

Wimbish said judges should base their decisions “independent of politics,” but party affiliation can help inform voters of judge’s endorsements and points of view.

HB 460 has not been assigned to a committee since being introduced on Dec. 27. 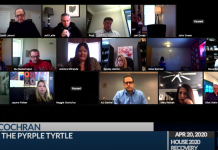