State data shows 25,600 homeless students in Ohio. That number has been increasing annually.

The data comes from the Ohio Department of Education, which is required under the 1987 McKinney-Vento law to track the number of homeless students enrolled and provide them certain resources like transportation and meals.

Homelessness, under the law, is broadly defined as students who “lack a fixed, regular, adequate nighttime residence.” This includes:

While homelessness is notoriously difficult to accurately count, Marcus Roth, a spokesman for the Coalition on Homelessness and Housing in Ohio, said he sees the DOE data as an accurate reflection of a steady increase in student homelessness, rather than an accurate headcount.

He said the trend tracks with research from the Ohio Housing Finance Agency, which found about 70,000 Ohioans accessed services provided for homeless people in 2017, compared to about 58,000 in 2012.

“We do know … the number of people accessing homeless services really has been increasing overall, and the increases are driven by children,” he said. 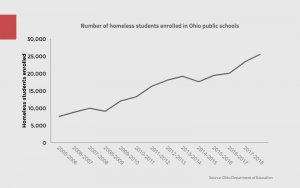 The state number is likely too low, according to Susannah Wayland, the homeless education coordinator with the state Department of Education. She said between the broad definition of homelessness and the stigma sometimes attached to economic hardship, the data is likely an undercount.

Some of the counties with the highest rates, according to DOE data, include:

‘Getting them here is the main challenge’

Under McKinney-Vento, every school district has its own liaison who works to identify students who may be experiencing homelessness and connect them to select resources.

In interviews, several of the liaisons emphasized one key challenge — providing students transportation so they can stay enrolled in their district of origin, regardless of their new living situation.

“A lot of it has to do with transportation and getting them here,” said Jessica Kohler, a principal for Liberty Local School District in Trumbull County, which sees a handful of homeless students every year.

“Getting them here is the main challenge.”

Similarly, Wayland said transiency can get in the way of academic success, and a key piece of the law is allowing students to stay in the school they attended before becoming homeless, if they wish.

Mary Alice Sigler, a liaison for United Local Schools, in Columbiana County, said finding transportation solutions to keep education stable for homeless students is the linchpin of the job.

“They’ve already had some sort of trauma in their homelives; you want to keep some level of consistency,” she said.

Findlay Digital Academy, an online public charter school for students at high-risk of dropping out, faces a unique set of challenges for its homeless students, according to Rosemary Rooker, the school’s executive director and homeless liaison.

That can mean ensuring students have access to the internet, transportation to in-person tutoring and labs the school offers, or just linking the students up with area resources for people experiencing homelessness.

“I guess the important part is we just work closely with our community resources and that we’re linking people to all these services that are available,” she said. “They don’t always know where to go.”

In an interview, Wayland declined to speculate on what might be behind the threefold-increase in student homelessness. She said she’s worked with students whose families have been through evictions, domestic violence, house fires, drug addiction and more.

“There’s just a multitude of hardships,” she said.

To Roth, it comes down to economics. For one, since the financial collapse of 2008, many Americans switched from home owning to renting, driving up demand in rental markets, he said.

Couple that with other macroeconomic forces, and there’s a squeeze on middle class budgets.

“What we think is basically that we’ve seen a decades-long trend at this point where rents are increasing, and wages are pretty stagnant, especially for people at the lower end of the income scale,” he said. “So that gap between wages and rents is expanding.”

From her principal’s office, Kohler said a lot of it comes back to the substance abuse epidemic.

“In my experience, that’s why a lot of these kids are getting displaced from their homes,” she said. “Whether it’s to go live with grandma or another family member.”

What’s more important to Wayland than guessing why the rate is increasing, she said, is making sure the state is doing what it can to keep the students on track. They face a world of different challenges from instability to judgement.

“The existence of the law is not to stigmatize or just identify,” she said. “We want to go beyond the compliance and just know the reasons the provisions exist is to support families in transition and keep their students in the pathway of success.”

State data shows 25,600 homeless students in Ohio. That number has been increasing annually.