An effort to remove a duty to retreat from Ohio self-defense legislation came up against criticism from students, parents and elected officials in a hearing on the proposal.

Cleveland City Councilman Kevin Conwell shared his experience walking in the University Circle in his council ward, where he said a white woman called police because she felt threatened by his presence on the sidewalk.

In his testimony to the Senate Government Oversight and Reform Committee, he said changing the language of self-defense law could make similar situations more dangerous for him and other black men.

“If you push a law like this, I feel threatened,” Conwell told the committee.

Those who testified Tuesday said Senate Bill 237 would bring a “shoot first, ask questions later” mentality to self-defense. The bill would eliminate a person’s obligation to find an escape before using force in a threatening situation.

Many brought up the idea of implicit bias as a filter used by both law enforcement and civilians when making decisions about use of force.

The executive director of the Ohio Prosecuting Attorneys Association, Louis Tobin, stood in opposition to the legislation as well, arguing that the law change would be a “response to imaginary problems,” while simultaneously causing new problems.

“A person could be immune from arrest and prosecution under Senate Bill 237 if they shoot and kill someone because they believed that the person was going to use force that did not involve a danger of death or great bodily harm,” Tobin said. “This will lead to miscarriages of justice.”

Some students also spoke of their concerns about “stand your ground” law, the policy under which the duty to retreat clause stands.

“I want laws to help reduce gun violence,” said Lara Kowalcyk, a senior at Grandview Heights High School and co-president of her school’s Students Demand Action chapter. “I want my Ohio legislature to become proactive in developing policies that will help to resolve the problem.”

Several members of the Ohio chapter of gun control advocacy group Moms Demand Action for Gun Sense were in attendance at Tuesday’s hearing.

Wearing a bright red t-shirt emblazoned with the organization’s name, Pat Krummrich cited statistics from a RAND Corporation study which found “stand your ground” laws may increase violent crimes, and from Everytown for Gun Safety research showing the laws have a disproportionate impact on communities of color. The national Moms Demand Action was organized by Everytown for Gun Safety.

Madison Township resident and self-proclaimed gun owner Sandra Ison said she fears for her kids as her township fights over a decision to allow teachers to arm themselves at school. She said she prays daily for her son’s safety as a college student near Dayton’s Oregon District, where nine were killed and 32 injured after a shooter opened fire.

The elimination of duty to retreat would allow “open season on children in our schools,” she said.

“Ohio has taken a stand as a pro-life state, and I cannot think of a more pro-life issue than reducing Ohio deaths by gun violence,” Ison told the committee.

The committee heard from supporters of the bill at a December hearing. 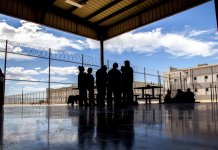 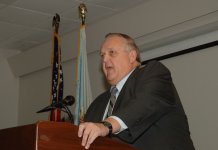