To appear on the ballot for the 25th House District, Tiffany White needed 50 valid signatures on her nominating petition. She submitted 89 in December. The Franklin County Elections Board ruled only 49 signatures were valid.

The ultimate name the board rejected? Tiffany White.

In a letter White attached to her lawsuit, Jeff Mackey of the Franklin County Board of Elections wrote White to inform her that her signature should not have counted toward the total of valid signatures submitted.

“As a result, your petition contains only 49 valid signatures, and so is insufficient,” he wrote.

White’s lawsuit, filed Wednesday, does not challenge the board’s decision to discount her signature. However, she claimed the board improperly rejected two other valid signatures, and only discounted her personal signature at the eleventh hour.

Should White make it on the ballot, she’d join a crowded primary of five Democrats seeking to replace Democratic Rep. Bernadine Kennedy Kent, who is not running for re-election.

According to her lawsuit, the board at first determined only 47 signatures of the 89 presented were valid, including White’s.

White then submitted notarized affidavits from five signatories earlier this month certifying their name, address, and a statement affirming they signed the petition, according to her lawsuit.

In a second review, the board accepted three of those five and “inexplicably and unreasonably” discounted the other two, according to White’s lawsuit. This brought the total to 50.

On Jan. 3, Oscar Woods, of Columbus, filed a complaint with the board, alleging White is not allowed to sign a petition for her own candidacy. The board agreed, dropping the total from 50 to 49.

White alleged the board’s unexplained decision to discount two signatures unfairly kept her off the ballot.

Aaron Sellers, a spokesman for the board of elections, declined to comment on White’s allegations. He said for now, White is not slated to appear on the March 17 primary ballot.

While late adjustments are possible, he said some ballots for Ohioans overseas go out this weekend, and early voting begins Feb. 19.

“We will abide by the court’s ruling but it’s definitely a timely matter,” he said.

In an interview Wednesday evening, Bob Fitrakis, an attorney representing White, said he expects the court to move swiftly on the matter. He didn’t object to the board’s refusal to count White’s signature for her own candidacy. However, he said the board should have reconsidered all the signatures, not just a select few that put the petition under its critical mass. 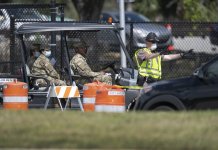