After being rescheduled because of the education bill fight, supporters are once again scheduled to make their arguments for an anti-LGBTQ discrimination bill in Ohio.

The Ohio Fairness Act is a bill that would make sexual orientation and gender identity or expression part of the civil rights law’s “covered characteristics” for which discrimination is prohibited.

Public accommodation is part of not only legal acceptance for members of the LGBTQ community, but also of societal acceptance. Jody Davis saw discrimination of all kinds as she made her way through her journey of self-acceptance as a transgender woman.

Davis grew up in Cincinnati and from a young age, “knew something was different” about herself. Without access to the internet to see anything past her community and her family’s Catholic church, she grew up feeling like she was the only person that felt the way she did.

“I would pray I’d wake up as a girl all the time,” Davis said.

She got through high school, and joined the Army to try to “man up and cure myself of this crazy gender stuff.”

She struggled through a marriage that ended painfully, and even went into what she didn’t know at the time was conversion therapy through an evangelical church.

“I joined that church thinking getting involved would help; I thought that would save me,” Davis said.

But Davis would go on to finish her master’s degree at The Ohio State University in 2011. She began seeing a counselor, coming out as transgender a few years later.

Davis thought being in Columbus might bring her less discrimination than other places she’d been, but when it came to housing and even buying a wedding dress for her future wedding, she ran into issues.

“Gender issues or not, I had male privilege, and even now I have white privilege, so I know if I have these struggles, people have it a lot harder than I do,” Davis said.

That’s why Davis plans to testify in support of the Ohio Fairness Act at the Statehouse on Tuesday. Now, as a registered nurse, social worker, and part-time counselor, Davis sees the need to step for legislation that could help with some of the struggles she herself faced.

“It’s more than past time that (the state) tries to enforce protections for us, especially with different cities and counties (in Ohio) that have these fairness acts,” Davis said. “We need this legislation because we have nothing statewide like that.”

Along with creating a category of covered characteristics, the bill aims to create a comprehensive educational program designed to eliminate prejudice, “further good will among those groups,” and “emphasize the origin of prejudice and… discrimination, their harmful effects, and their incompatibility with American principles of equality and fair play,” according to the legislative analysis of the bill.

The bill would expand civil rights law to include sexual orientation and gender identity or expression, but also holds firm on religious exemptions that are currently a part of the state’s civil rights law, the bill language states.

The House Civil Justice Committee is set to hear from supporters of the bill at 2 p.m. 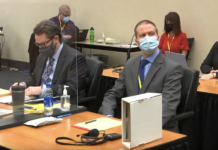 Supporters of Ohio Fairness Act: ‘We need this legislation’