Ohio is flat, rural, red and boring. Except that it’s not.

Tommy Greer, 34, fishes in the Cuyahoga River with a background of downtown Cleveland in this file photo. (Photo by Jeff Swensen/Getty Images)

It’s not that these statements are entirely inaccurate, but the massive generalizations they represent are wildly off base.

In reality, while Ohio boasts plenty of flat corn country, we also have the foothills of Appalachia stretching along Eastern and Southeastern Ohio and all the singular culture of that unique region. We have nautical hamlets and islands and beaches and thriving wineries along the shores of Lake Erie. We have the Ohio River wrapping around our right flank and across the bottom of the state to Cincinnati.

We have a big agricultural industry, yes, but we are also a staple of the industrial Midwest, a legacy of which we are very proud and that our elected leaders are working hard to help revive. Places like Akron and Youngstown have seen their fair share of trouble, sure, but are making big plans for a 21st Century future.

Cleveland and Cincinnati may often be used as the butt of jokes as downtrodden, boring places to visit, but anybody who actually has visited Over-the-Rhine in Cincy or E. 4th St. in CLE in recent years has found vibrant, energetic, fun places full of craft breweries, all varieties of entertainment, museums, art, amazing restaurants and plenty of culture.

Then there’s Columbus, which seems almost too generic to use as the butt of a joke. But it’s not generic, at all. Columbus is the fastest growing city in the state of Ohio. Often used as a bellwether of product testing for national chains, Columbus is seeing a cultural renaissance and attracting big business in areas from insurance to technology.

Ohio is boring? Sandusky boasts the best roller coaster amusement park in the world in Cedar Point. And if you aren’t up near Lake Erie to ride the best coasters around there, we have Kings Island down near Cincinnati. Like science? We have two amazing, hands-on science museums in the form of COSI in Columbus and the Great Lakes Science Center in Cleveland. Right next door to the Science Center is the Rock and Roll Hall of Fame. Forty minutes down the road, in Canton, is the Pro Football Hall of Fame. (We do like football.)

Tired of boring American lagers? So are we. The Ohio craft brewery game has exploded in recent years, perhaps best shown by the Athens-hosted Ohio Brew Week featuring products from nearly 50 craft breweries around Ohio. Athens is also home to a Halloween party known as the Mardi Gras of the Midwest.

The point is, we have a lot going on in Ohio, and that extends to our politics. 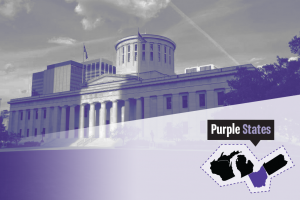 Ohio is not a red state full of white people. Ohio is more diverse than one might think, and it is purple.

Is Ohio rural? Well, halfway. With 11.7 million residents, more than half live in just 10 of our 88 counties.

National pundits in recent years are quick to write off Ohio as red politically. And why not? Republicans have controlled both chambers of the Statehouse for 10 years. They’ve won the governorship and other statewide offices three cycles in a row. Donald Trump won here in 2016 by eight points.

So why would Ohio be perceived as so deeply red? Well, gerrymandering.

As reported by Cleveland.com, despite only winning 52% of total votes in 2018, Republicans won 75% of U.S. Congressional seats. Despite only winning 50.3% of total votes for Statehouse seats in 2018, Republicans ended up with supermajorities of 62 of 99 seats in the Ohio House, and won 11 of 17 seats in the Senate up for reelection (their full Senate supermajority is 24 to nine).

If Ohio’s Statehouse and Congressional delegation were truly representative, those numbers would be much closer to even with a slight Republican edge.

The effect of this perpetuates the narrative of Ohio being somehow deeply red because politicians in gerrymandered districts don’t have to run to the center to protect themselves, they have to go to the extreme to protect their flank.

So even though actual Ohio voting trends make for an essentially 48-52 or 49-51 state, supermajorities in the state legislature and a 12-4 advantage in Congress make for lawmakers who play to their base, passing extreme laws that are entirely out-of-touch with nearly 50% of the population they’re collectively representing.

One could say that’s not how a truly representative constitutional republic ought to function, and one would be right.

At the very least, these facts give the lie to the idea that Ohio is a red state. It’s not. Ohio is a purple state, rigged by gerrymandering into being red, and resulting in unrepresentative extremism.

Editor’s Note: This commentary is part of the Purple State Project, an effort over the next several months to talk to Ohioans about how state and federal policies are affecting their lives.

Ohio is flat, rural, red and boring. Except that it’s not.

Settled into new homes, refugees in US say they are working… by Guest Author June 22, 2021
Americans in climate-threatened regions anxious for… by Laura Cassels November 3, 2021
Ohio’s fight for LGBTQ+ protections by David Rees May 10, 2022