Abbey Haudenshild pictured holding her son, Weston, with Parker by her feet. Weston and Parker both have hemophilia, which led the family to the world of “copay accumulator” policies. Photo provided by the Haudenshild family.

Abbey Haudenshild knew something was wrong when she learned she owed her pharmacy nearly $8,000.

The boys have hemophilia, a condition that hinders their blood’s ability to clot. The potential for internal bleeding scares Haudenshild the most, but even a cut lip — as Parker experienced a few months ago — can go on for hours.

“[Parker] would wake up with pillows covered in blood because he was breaking open at night,” she said.

The boys’ medicine enables their blood to clot and while it’s expensive, Genentech,  the pharmaceutical company, provides copay assistance, a common practice among drug makers with pricey products. The assistance covered Haudenshild’s share of the drug’s cost.

Haudenshild, from Findlay, used the copay assistance for two years without a hitch. But after getting the pharmacy bill in January 2018, she learned that the family’s insurance company had adopted a “copay accumulator” policy. These policies block patients from using any third-party monies toward their deductibles and out-of-pocket maximums. Copay accumulator policies are a growing industry trend and they have caught the attention of Ohio legislators.

Critics of the accumulator policies say the insurers are “double dipping” by taking patient money and the copay assistance.

“The insurance companies have been getting the coupons, and it hasn’t counted towards the deductible,” said Carl Schmid, executive director of the HIV and Hepatitis Policy Institute. “So they’ve been collecting all that money, then once it runs out, they’re collecting the money again from the patient until they meet the deductible. So they’re actually collecting a lot more money.” 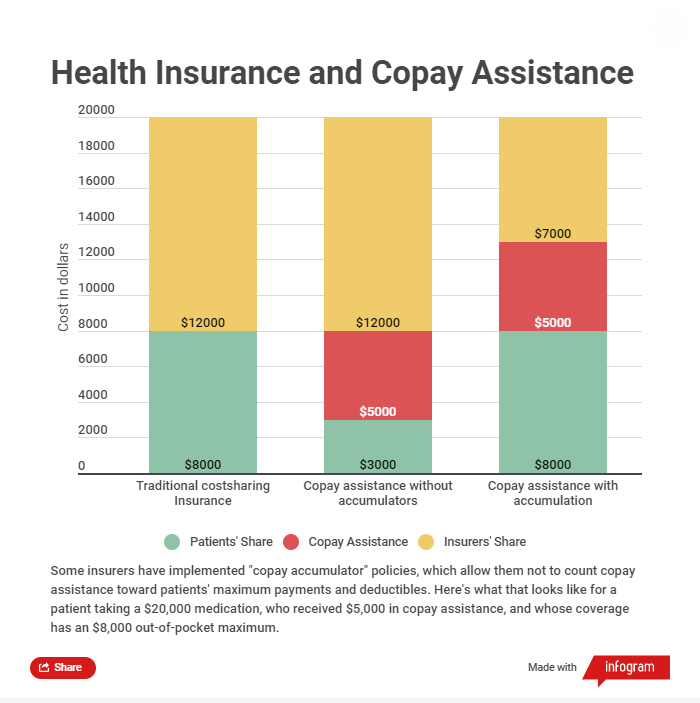 Haudenshild said her insurer never told her about the new policy, or how it would effectively cost her about $8,000 per year.

Insurers argue accumulator policies give patients an incentive to use generic versions of brand name drugs.

However, it’s a moot point to Haudenshild – there’s no generic equivalent for hemophilia medication, meaning she will probably have to pay the whole $8,000 maximum for her children’s medication every year.

The same is true for people with HIV, multiple sclerosis and other chronic, complex diseases that require specialty, high price drugs, for which there’s no generic option available.

Two Ohio lawmakers introduced legislation that would ban insurers from using accumulator policies when there’s no generic version of the drug available. The bill, backed by the pharmaceutical industry and several patient groups, is up for its first hearing Thursday.

But some experts warn accumulator policies are just the newest frontier in a series of industry battles over who should pay for skyrocketing drug costs.

Patients, meanwhile, are getting caught in the middle, said Linda Casto, who runs the hemophilia unit at Nationwide Children’s Hospital. Of the 140 children she works with there, most have accumulator policies in their family insurance plans.

“It’s just shifting the cost to the patient, is the outcome,” she said. “The driver is one party saving money at the expense of somebody else absorbing it.”

The staff at Equitas Health first started hearing reports from its HIV and AIDS patients getting hit with huge bills because of copay accumulators about two years ago.

They were even more surprised to discover their own employer insurance package contained an accumulator policy.

“Oftentimes, patients don’t know the language exists until they go to the pharmacy and they’re hit with a big copay and out-of-pocket cost,” Kackloudis said.

Groups representing patients with HIV have pushed for the bans. They circulate similar stories of insurers blindsiding patients with drug costs, which researchers say fall between $1,800 and $4,500 per month.

Ohio insurers who offered at least one plan with accumulators include Buckeye Health Plan (page 53 of 88), Anthem/Blue Cross Blue Shield (page 55 of 137), and CareSource (page 71 of 143). Molina adopted the policy, but lists it on the summary of benefits.

None of the insurers granted an interview or responded to inquiries.

Miranda Motter, president of the Ohio Association of Health Plans, which represents insurers who provide coverage for 9 million Ohioans, largely declined to comment on the reports of patients feeling sprung by accumulator policies.

“Ohioans should understand their insurance coverage,” she said. “I know plans are doing a lot to make sure that happens.”

She said manufacturers are best positioned to warn patients the copay assistance they offer might not be counted by their insurers toward their deductible and out-of-pocket maximums.

Simon Haeder, a public policy professor at Penn State University, said accumulators are a new vehicle for an old problem: sick people cost more to insure than healthy ones, and everyone wants to offload that burden.

It’s tempting to villainize insurers, he said, but there’s a huge incentive for pharmaceutical companies to inflate list prices for drugs, then offer copay assistance to spare the individual patient. This shifts the manipulated cost to insurers.

“The main culprits here are pharmaceutical companies who charge outrageous prices that are generally not justified at all,” he said. “They then try to make these backdoor adjustments by funding these cards, or coupons, or creating fake nonprofits that help people pay for this stuff, when all you really need to do is charge reasonable prices for your stupid prescriptions and then we’re not in this mess to begin with.”

Insurers would agree. Motter pointed out that the Centers for Medicare and Medicaid Services recently proposed a rule allowing insurers to impose copay accumulator policies. The agency has publicly argued that copay assistance drives patients away from generics toward pricier drugs.

“Copay coupons are a tool that drug manufacturers are using today intentionally with the insured population,” she said. “They are intentionally used to steer patients to higher cost brand drugs.”

Although the Ohio legislation would only affect patients who take drugs with no viable generic, she said the association opposes it regardless. PhRMA, a trade association representing the pharmaceutical industry, supports banning the use of accumulators.

“We believe it’s common sense to stop this practice and ease the burden insurance companies are placing on patients,” said Nick McGee, director of public affairs for the group. “Payments from third parties to help patients with insurers’ rising cost sharing obligations should count as if paid by patients themselves.”

The legislation would require insurers to count “all amounts paid” by patients toward their benefits, although this wouldn’t apply if there is a “medically appropriate generic equivalent and the name brand drug is prescribed,” but is not “considered medically necessary” by the physician.

The legislation would make Ohio the fifth state to ban accumulators in some fashion, behind West Virginia, Virginia, Arizona and Illinois.

West said accumulators are a “discriminatory” policy targeting a small, vulnerable population. He said the legislation is a centrist position that would stamp out the trend among insurers.

“When people get insurance, they get it because they think they’re insured in case they need that insurance and they can use it,” he said. “I think a lot of families are finding themselves in the situation where they need the insurance, and they go to use it, and it’s not adequate.”

Manchester said the bill is a piece of a solution for an industry battle that’s hurting patients.

“You simply cannot argue with people’s personal experiences when they get a bill that says your deductible wasn’t met because of this copay accumulator policy we put in place,” she said.

However, Haeder said state laws can’t regulate employers who self-fund coverage for their employees (federal laws can). In 2019, about 61 percent of people who got health care through their employer did so through a self-funded plan, according to research from the Kaiser Family Foundation.

Haudenshild said she won’t be able to make it Thursday. She has to work.

The issue doesn’t make sense to her – what difference does it make to her insurer where the money comes from?

The worst part, she said, is knowing that it’s not just a rough year. Hemophilia is a lifetime condition. Barring any policy change, $8,000 per year for her kids’ medicine is just the new normal.