In 2016, Donald Trump ran on “bringing back” manufacturing jobs to Rust Belt states like Ohio, which was one factor in his surprise wins in Michigan, Wisconsin and Pennsylvania (and less surprising victory in neighboring Ohio).

“The heart of the [economic] slowdown has really been in manufacturing. The global manufacturing sector is in a recession right now, but the U.S. is doing a little better than everyone else,” Aditya Bhave, vice president and global economist for Bank of America Merrill Lynch Global Research, said during a Business Leaders for Michigan event in Detroit in November.

Much of the uncertainty comes from the trade and tariff policies from the Trump administration — a policy pitch that helped him win voters throughout old blue-collar Democratic strongholds in the Rust Belt.

Last month, Trump signed the United States-Mexico-Canada Agreement (USMCA), which received overwhelming bipartisan support in Congress. He referenced the deal at a rally in Hershey, PA in December.

In his State of the Union address earlier this month, Trump touted the USMCA, saying that it would help with “bringing back our manufacturing jobs, expanding American agriculture, protecting intellectual property, and ensuring that more cars are proudly stamped with four beautiful words: made in the USA.”

Despite widespread legislative support, manufacturing experts note that the USMCA is largely a replacement of the dated North American Free Trade Agreement (NAFTA).

With Canada and Mexico accounting for 33 percent of US exports, according to federal data, “that treaty just ratified should begin to help normalizing” the flow of goods and buoy manufacturers, said David Taylor, president of the Pennsylvania Manufactruer’s Association, an industry lobbying group and trade association.

Also, trade tensions between the United States and China appear to be cooling, as both Trump and Chinese  President Xi Jinping recently reaffirmed their support for the first phase of a new trade agreement, Reuters reported. 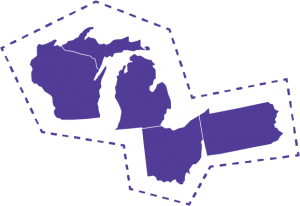 Pennsylvania’s manufacturing industry has seen ups and downs, but it’s role  in the state’s economy is still large.

According to the the National Association of Manufacturers, an industry trade group, manufacturing output was worth $93.75 billion. That’s almost 12 percent of the commonwealth’s GDP.

The Bureau of Labor Statistics lists 575,000 manufacturing jobs in Pennsylvania. Those workers bring home a weekly paycheck of $1,199, or roughly $62,348 over the course of a year.

Overall, this makes Pennsylvania the sixth biggest state for manufacturing jobs, with only fellow rust beltians Ohio and Michigan ahead.

But Taylor said those employment numbers could be even higher.

“There are 6,000 open manufacturing positions where our employers are having great difficulty in finding qualifying employees,” Taylor said.

At times over Trump’s first term, Pennsylvania’s most symbolic industry, steel, looked to be on the upswing.

The investment would make the plant more efficient as well as reduce pollution, the company said.

“This is a truly transformational investment for U. S. Steel. We are combining our integrated steelmaking process with industry-leading endless casting and rolling to reinvest in steelmaking and secure the future for a new generation of steelworkers in Western Pennsylvania and the Mon Valley,” David Burritt, the company’s president and CEO, said in a May 2019 press release.

The decision came as the industry was riding high on tariff-juiced steel prices. Since, prices have fallen, shrinking revenues.

U.S. Steel finished 2019 in the red, and also announced that it was slowing down its previously announced investment in Pennsylvania.

Instead, it was purchasing an under-construction mill in Arkansas that turns scrap metal into usable steel.

“We’re actually pivoting to the future and focusing on the company we want to become,” Burritt said at the time, according to Pittsburgh Post-Gazette.

Jamie Karl, of the Ohio Manufacturing Association, said there has been growth overall, and the industry within the state has increased since Trump took office.

“Over the last year, we have fluctuated, and I would attribute that in part to the tariffs,” Karl said.

In the context of a decade, the state’s industry changes are only slight. In Dec. 2009, Ohio reported 613,600 manufacturing jobs. In the month before Trump was inaugurated, the state held 687,600 jobs.

Karl said Ohio seems to be unique in the country as far as manufacturing growth.

“I don’t think there’s this story of maintaining manufacturing jobs in other states,” Karl said.

Still, projections by the Ohio Department of Job and Family Services say the industry will lose 40,000 jobs by 2026, a nearly 6% loss. The biggest projected losses are in rubber product manufacturing (23%), printing and related support activities (18.2%), and glass manufacturing (16.7%). Iron and steel mills and industrial machinery manufacturing are close behind, with projected losses of between 15 and 16%.

Naturally, the role of manufacturing in the U.S. economy, and particularly in swing states like  Pennsylvania, is an issue the myriad Democratic presidential candidates have sought to use as key components of their platforms.

Other major candidates appeared to have elements of policy proposals aimed at the revitalization of U.S. manufacturing.

For Taylor, of particular importance for Pennsylvania is the candidates’ stance on fracking, or hydraulic fracturing, the process that’s used to extract natural gas from rock.

The natural gas (yes?) industry, and Taylor, have been pitching a vast manufacturing future stemming from natural gas production. It’s embodied in a still-under construction petrochemical plant in Beaver County, west of Pittsburgh,, which turns fracked ethane gas into plastic.

A second, similar tax credit proposal is causing a political fracas in Harrisburg this month.

“That petrochemical manufacturing that is waiting to be born, it is going to be bigger in its economic impact then drilling,” Taylor said.

But for any candidate who wants to help manufacturing, Kristin Dziczek, vice president of industry, labor and economics at the Center for Automotive Research in Michigan had a small bit of advice.

“And settle down with the tariffs a bit,” she said.

Nick Manes covers West Michigan, business and labor, health care and the safety net. He previously spent six years as a reporter at MiBiz covering commercial real estate, economic development and all manner of public policy at the local and state levels. His byline also has appeared in Route Fifty and The Daily Beast. When not reporting around the state or furiously tweeting, he enjoys spending time with his girlfriend, Krista, biking around his hometown of Grand Rapids and torturing himself rooting for the Detroit Lions.