Tony Long, director of tax and economic policy for the Ohio Chamber of Commerce, said Senate Joint Resolution 3 could yield “unintended consequences” for Ohio businesses down the line.

“The General Assembly, absent a two-thirds supermajority vote on an income tax increase, will be forced to look to other taxes when it needs to find more revenue for spending projects,” he said to the Senate Ways and Means Committee.

Ohio’s income tax rates are currently at their lowest levels since the 1980s. However, lawmakers could hike the rates with a simple majority vote.

Senate Resolution 3 would change the Ohio Constitution to require a supermajority (66 of 99 votes in the House or 22 of 33 in the Senate) to hike the rates.

Long said if lawmakers adopt the structural change, they’d be more likely to lean on different business taxes like the financial institutions tax, petroleum activity tax or insurance premium tax, which would harm the business climate. The sales tax could be another easy target, he said.

Critics of the bill, like Nicholas Bates of One Ohio Now, a progressive group that calls for public investment, said it would hamstring future legislatures’ ability to raise taxes if they needed to.

“Simply put, we shouldn’t lock up one of the tools we have to solve problems in our state,” he said.

Others, like an analyst with Policy Matters Ohio, said it would compel credit ratings agencies to downgrade Ohio’s bond rating, which would make it more expensive for the state to borrow money for infrastructure projects.

The Ohio Legislative Service Commission first raised this concern in analyzing the bill, which was echoed at a hearing last month by the number two Republican on the committee, Sen. Louis Blessing, R-Colerain Twp.

“The thought that our bond rating could be impacted in a negative way gives me pause,” he said.

In an interview after Tuesday’s hearing, Chairwoman Kristina Roegner, R-Hudson, said she’s supportive of the legislation because it will steer lawmakers toward spending cuts instead of tax hikes in the face of a budget hole.

She said she hasn’t heard from the ratings agencies on the bill. She said the change would certainly make it more difficult, but not impossible to raise the income tax rates if need be.

“I think it’ll be harder, but I think that’s the intention is to make it harder,” she said. 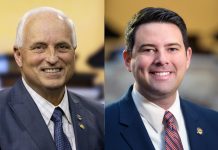