With two frontrunners remaining, the Democratic presidential primary is at last turning its attention to Ohio.

Joe Biden and Bernie Sanders have announced plans to campaign in Ohio on Tuesday. Both candidates will host events in Cleveland, with Biden also making a stop in Columbus.

Six states vote on Tuesday, with the most delegates being allocated in Michigan and Washington. As those voters head to the polls, both candidates are getting a head start on appealing to the next crop of states voting the following week.

The primary in Ohio is scheduled for Tuesday, March 17. Despite its reputation as a General Election bellwether, Ohio has played a middling role during the primary season. The previous highlight was a Democratic debate held last October in Westerville.

Ohio Congressman Tim Ryan had a cup of coffee in the presidential race and dropped out months before the first vote was cast. Candidate visits to this point, save for their Westerville debate appearances, have been few and far between. Beto O’Rourke hosted a roundtable last fall in Lordstown, while fellow former candidates Elizabeth Warren and Mike Bloomberg enjoyed 2019 pit stops in Chillicothe.

There hasn’t been a poll conducted of Ohio voters since last fall, long enough ago that the results page feels like a historical artifact. Emerson reported that 1% of Ohioans supported candidates John Delaney and Steve Bullock? And just who is Joe Sestak and Wayne Messam?

“We’re flying a little bit blind right now,” said Kyle Kondik, an Ohio native who works for the University of Virginia’s Center for Politics. “There’s not really much fresh polling.”

Biden and Sanders were statistically tied in the Emerson poll conducted in October, but much has changed in the primary contest since then. Democrats in 28 states, the American Samoa and those living abroad will have had a chance to cast ballots by the time Biden and Sanders make their 2020 debuts in the Buckeye State.

There is some uncertainty about how Ohio will go, and each candidate has their strengths. Biden unquestionably has momentum in the race following his performance on Super Tuesday. He enjoys a host of Ohio endorsements, from General Assembly leaders like Assistant Minority Leader Rep. Kristin Boggs to former Gov. Ted Strickland. Biden even has the support of John Weaver, a Republican chief strategist for former Gov. John Kasich.

Sanders, a prolific fundraiser with a larger grassroots base, has raised the most money from Ohioans out of all the Democratic candidates this cycle. A recent review from the Columbus Dispatch found that the U.S. senator from Vermont had raised $840,000 here compared to $427,000 for the former vice president.

Incidentally, neither candidate has as good of campaign infrastructure as another candidate who has already dropped out: Mike Bloomberg. The former New York City mayor opened numerous campaign offices around the state, but quit the campaign after Super Tuesday and endorsed Biden. Bloomberg reportedly plans to utilize some of this infrastructure to support the eventual Democratic nominee against President Trump, but how it may be used during the primary election remains to be seen.

A prediction for Ohio

How will Biden and Sanders do in Ohio? Kondik said to keep an eye on the results in Michigan.

Sanders canceled a Mississippi rally to focus instead on Michigan, a state he won in 2016. There are two other big delegate states that vote alongside Ohio on March 17: Illinois and Ohio. With Biden up big in the polls in Florida, Kondik said that Bernie will likely turn to the Midwest in attempting to close the delegate gap.

Proportional delegate allocation is a blessing and a curse for Sanders. A big loss in a state like South Carolina or Florida does not spell doom. The trouble is, though, it’s difficult to make up ground. It will take an equal number of big wins for Sanders — and then some — to overtake Biden. Doing so while the momentum is tilted heavily in Biden’s favor makes the task even tougher.

Sanders won just 13 of Ohio’s 88 counties in the 2016 primary against Hillary Clinton. He performed well in counties with college towns such as Wood (Bowling Green), Portage (Kent State) and Athens (Ohio University). Sanders eked out a few other rural county wins in Northwest and Southern Ohio, but Clinton otherwise dominated in city centers and Appalachia alike.

Kondik said it’s tough to see where Sanders picks up enough votes to not just win Ohio, but earn a convincing delegate share that puts him back on track to win the nomination. The senator’s fortune could change here upon traveling to the state, running advertisements and gaining media attention.

“I would think Biden is favored in Ohio based on what we know right now,” Kondik said. “If he does great on Tuesday, this thing could be over before we realize it.” 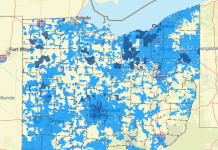