Twenty-four hours prior, he was asking. On Tuesday, Gov. Mike DeWine was telling.

Speaking at the latest of what has become a daily briefing of advancements of the novel coronavirus in Ohio, DeWine said he was going to issue a legal order within the next few days to prohibit professional and collegiate teams from allowing spectators at games.

The news came after a fourth Ohioan, a 53-year-old Stark County man, tested positive for COVID-19 after falling ill February 25.

Ohio Department of Health Director Amy Acton said this marks the first instance of “community spread” of the disease — as opposed to imported cases from travelers or cases among contacts with a known infected person.

Acton called the community spread a “gamechanger” as DeWine made his case for the heightened preventative measures, which include restricting nursing homes to one visitor per day.

According to Acton, once officials detect two cases of community spread, the assumption is that one percent of the population is infected.

However, the state only has test results online for the virus on 25 Ohioans and is awaiting results on 24 more, as of 2 p.m. Wednesday.

Acton said Ohio only has one testing kit that can offer somewhere between 300 and 850 tests. Thus, health officials are prioritizing tests for those with the highest risk levels — the elderly, the immunocompromised, and people with pre-existing health conditions.

“We’re testing the highest risk because we’re testing based on the resources we have,” she said. “Up to 40% of the population could eventually get this.”

She continued, saying soon there could be no need for either contact tracing or testing when the disease infects a certain percent of the population.

DeWine said he has not formally issued his order but it would follow “recommendations” he issued Tuesday, calling on colleges to host classes remotely and sporting event organizers to prohibit spectators. He declined to offer specifics as to what qualifies as a “mass gathering.”

On Tuesday, Colleges largely fell in line, while both the Cleveland Cavaliers and Columbus Blue Jackets said they would allow ticketed entry as usual.

The Blue Jackets issued a statement Wednesday evening announcing fans would not be allowed to attend Thursday’s game or any others while a public order is in effect.

“The club will work with season ticket, club and premium seat holders on appropriate credits or refunds for affected games, while single-game buyers will receive a refund through their point of purchase,” the team said. “The club will be communicating to season ticket holders, partners and other affected parties with additional information soon.”

The NCAA released a statement Wednesday announcing it would not allow spectators at the upcoming March Madness basketball tournament, which includes play in Ohio.

The Rocket Mortgage FieldHouse in Cleveland said it will not allow fans at upcoming NCAA basketball and minor league hockey games. It said it will hold off on a decision regarding the next Cleveland Cavaliers NBA game at home (March 24) until more information is available.

“Although the exact scope, terms and timing of the order announced by Governor DeWine this afternoon are not immediately available, we are undergoing an extensive process of review with the NBA, G-League, AHL, NCAA and concert and event producers to plan for our next steps and impacts related to the order,” the organization said in a statement.

Later Wednesday evening, the NBA suspended its season after a Utah Jazz tested positive for the disease.

State officials broke the community-spread news just hours after the World Health Organization formally declared COVID-19 to be a pandemic.

The goal of the ramped up preventative efforts, DeWine and Acton said, is to slow the transmission rate and ease the burden on the state’s health care system.

They repeatedly cited the outbreak in Italy as a cautionary tale, in which a handful of cases two weeks ago turned into more than 12,400 cases as of Wednesday afternoon, according to data from Johns Hopkins University.

The newly affected man has been hospitalized at Mercy Medical Center, Acton said. Officials are now in the process of tracing his contacts with more than 100 people.

DeWine said it’s not yet time to close K-12 schools, but he has urged them to prepare for as much. Things will get worse, he said, before they get better.

“The sun will come up in the morning, but it’s going to get darker before that sun starts coming back up again,” he said. 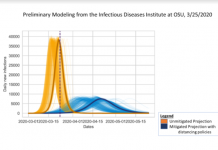 Tough times on the farm: A look at agriculture in the Midwest