Last week, Ohio’s legislature passed their COVID-19 emergency package. And while there were some much needed and positive things in it (no standardized tests this year, no report cards), the bill also settled the contentious debate over what to do with next year’s EdChoice performance-based voucher program.

A bit of background: Next year, due to legislative changes, 1,227 school buildings would have been labeled by the state as “failing”.  Families with students in those buildings could therefore receive publicly subsidized private school tuition vouchers to leave these schools.

The problem for districts is the way this program is funded, the state removes state revenue meant for the students in the districts and instead provides a private tuition subsidy — an amount that on average is about $1,300 more per pupil than the student would have received from the state if he or she had remained in the school district. This forces many districts to use local revenue to make up the difference.

Also, it is obvious that more than one-third of Ohio school buildings are not “failing” students, as the current 1,227 building calculation would conclude. And legislators on all sides of the aisle agreed that the state report card that made this determination is fatally flawed.

However, families were gearing up by Feb. 1 to request vouchers for next school year based on the expanded school building list. The legislature put off that deadline to April 1 and included $10 million in state funding to help offset the cost of increased vouchers. They were hoping to hash out a plan to address this issue before that date.

Then COVID-19 hit and everything changed.

The solution included in yesterday’s bill was essentially freezing the number of buildings at this year’s 500+ buildings, and limiting new vouchers to siblings of current recipients and incoming kindergarten students, as well as any 8th graders who want to take the voucher in high school.

But it’s all based on this current school year’s building list — which is still about double the amount of the 2018-2019 school year, but is far fewer than the 1,227 it could have been.

This solution also did not include the $10 million state infusion to help districts cope with the increase in vouchers.

So the immediate question became: Will this “freeze” really be a cost-neutral freeze on the program? Or do we still need an infusion of state cash to offset new vouchers?

Looking at the data, it appears we could be looking at an increase in voucher funding next year, but it could also be cost neutral. It all depends on how the math works out.

So next year, we will drop off the 2,324 12th graders, but gain that same general figure in new 12th graders. Assuming the same level of kindergarten participation, we will still have 3,264 students taking kindergarten vouchers.

The bill passed yesterday makes provisions to allow students who could have taken a voucher this year but didn’t, to take them next school year. Siblings of current voucher recipients are also able to take vouchers if they meet state criteria. We also may vary on different grade-level enrollment, which could affect the overall cost.

But the increase over this year’s funding should be limited, if it occurs. Maybe $1 million or so at the higher end. Which sounds like a lot. But when the program costs $148 million, that’s not a huge increase, especially considering how we could have been looking at a $100 million or more increase next school year if the school list had expanded to 1,227 buildings.

However, in districts like Cleveland Heights-University Heights, which have been hammered by vouchers, yesterday’s “freeze” won’t ease their challenge. They will still need a new money levy to handle their state funding losses to state-funded private school tuition subsidies.

So while the $10 million may not be needed statewide, the state does need to see how it can help alleviate the financial struggles many districts are having because of this EdChoice performance-based voucher. Especially since the program is based on a report card so wanting that it can’t even be issued if a few standardized tests can’t be administered for a couple weeks in April. 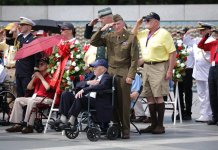 Memorial Day: Why veterans are particularly vulnerable to the coronavirus pandemic

How COVID-19 can help us forge a better judiciary