When the anti-Semitic comments amplified by state Sen. Andrew Brenner were uncovered Wednesday morning, Howie Beigelman, the son of a Holocaust survivor, knew what to do.

He picked up the phone and called Brenner directly to talk about them.

This is the third such call the executive director of Ohio Jewish Communities has had to make in the past year or so. Inflammatory references to the Holocaust and Nazi Germany are common enough among Ohio politicians, in fact, that Beigelman has a stated plan of how to respond.

“Unfortunately,” he told the Capital Journal, “we have a protocol on this.”

More than 36 hours after comparing the Jewish Ohio Department of Health director to Nazi Germany, state Sen. Andrew Brenner finally apologized for his comments amid a chorus of condemnation, including from the governor.

The Republican lawmaker from Powell had initially blamed the swelling controversy on reporters, but on Thursday provided an “updated additional statement” apologizing for his statements.

“I have always had a strong relationship with the Jewish Community,” Brenner said in the statement, “and firmly believe using the holocaust as an analogy or comparison for a public policy debate is offensive and demeans the tremendous sacrifices and atrocities Jews endured during World War II. I apologize for the statements that were tied to my social media that were hurtful.”

Brenner did not mention Dr. Amy Acton in that statement, who had been the original target of his comment. In an earlier apology on Wednesday evening, he wrote: “I’m sure she was offended by the comments as they were reported.” He had said the “manner in which it was reported was upsetting, inflammatory and hurtful.”

Gov. Mike DeWine, Senate President Larry Obhof and more than two-dozen elected officials from both parties have publicly condemned the comments made by Sen. Brenner and his wife, Sara Marie Brenner.

Other critics include the Anti-Defamation League and William Daroff, CEO of the Conference of Presidents of Major American Jewish Organizations:

Thank you @GovMikeDeWine for condemning the outrageous Facebook post by an Ohio State Senator likening COVID restrictions to Nazi Germany. Using Nazi references in politics cheapens the sacredness of the true horrors of the Holocaust and is deeply offensive. https://t.co/kElgHUPSqi

At least one Democratic lawmaker has called for his resignation. One organization that has donated to Brenner’s campaign committee also said it condemns him and told the Ohio Capital Journal it will consider asking for the donation returned.

Obhof put out a statement against Brenner on behalf of the entire Ohio Senate Republican Caucus. Ohio Republican Party Chair Jane Murphy Timken and Congressman Troy Balderson are among the other Republican voices to have come out against the lawmaker.

House Speaker Larry Householder has been silent about the issue and a spokesperson has not responded to a Capital Journal request for comment. A lawyer who purports to be Householder’s “top advisor” made a similar inflammatory remark, the Capital Journal reported Wednesday, saying Ohio health officials have “Gestapo dreams.”

To this point, only State Rep. Casey Weinstein, D-Hudson, has called on Brenner to resign.

The controversial comments made by Brenner and his wife have received coverage throughout Ohio and beyond, including in The Washington Post.

On Tuesday, which was Holocaust Remembrance Day, Brenner’s wife posted a photo of Dr. Amy Acton and likened the state’s COVID-19 response to being “like Hitler’s Germany.” She tagged her husband in the post. The state senator went along with the Nazi Germany comparison, replying: “We won’t allow that to happen in Ohio.”

The posts were later deleted, but the Ohio Capital Journal published screenshots of them in its article. 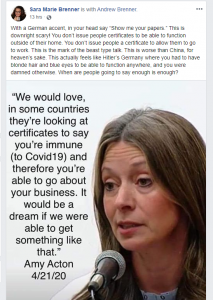 Sen. Brenner changed his story throughout Wednesday: at first defending them to the Columbus Dispatch, then falsely alleging to critics that the comments never happened and  claiming the controversy was a “left wing” lie.

By Wednesday evening, he acknowledged on his official Facebook page that the posts did happen but said they were misconstrued.

“What I actually said was not the same as what is being reported,” he said, belying the documented evidence. “I would never, ever say what I am accused of saying.”

Then on Thursday afternoon came the apology for his remarks.

Brenner had a private conversation Wednesday afternoon with Beigelman, who leads a statewide network of Jewish Federations in eight major Ohio cities as well a 150 nonprofit agencies around the state.

Beigelman said he called Brenner after the Ohio Capital Journal’s story was first published to discuss the state senator’s comments with him directly. Beigelman said Brenner described having understood the severity of his remarks from the day prior.

“I would say we had a respectful conversation,” Beigelman said. “No side was nasty.”

Beigelman said he told Brenner about his organization, about the concentration camp liberators during World War II and about those involved with Holocaust dedication in present times. Beigelman said he made clear the comparison used by Brenner was “out of bounds.”

Beigelman told this reporter he felt heartened by the outpouring of support. He said DeWine’s words striking down anti-Semitism were “really strong” and “impressive.”

In describing his conversations with “leaders from Ohio’s Jewish community,” Brenner said he appreciated the “understanding and support I have received.”

The Capital Journal asked Beigelman directly if the tenor of his conversation with Brenner was one of support from him or his organization.

“No, not support,” Beigelman answered, saying it was only a polite conversation with a mutual understanding of respect.

Beigelman was not aware of any other Jewish organizations or leaders that had talked to Brenner. The state senator did not name the people he’d purportedly talked to and has not responded to a request for comment by the Ohio Capital Journal.

Sen. Brenner is a former four-term state representative who is midway through his first term in the Ohio Senate. He is not up for re-election until 2022, but his campaign committee has already begun its fundraising efforts.

A spokesperson for the Ohio Bankers League, which donated to Brenner’s campaign last year, said the organization echoes the condemnation against the “unfortunate comments made by Sen. Brenner.”

JT Thurston, the vice president of public relations for the Ohio Bankers League, said the League’s political action committee board of directors will be reviewing its support for Brenner.

“We will definitely take these comments into account the next time we meet,” Thurston said.

They called 911 for help. Police and prosecutors used a new… by Brett Murphy, ProPublica January 3, 2023
Ohio’s fight for LGBTQ+ protections by David Rees May 10, 2022
“God, no, not another case.” COVID-related stillbirths… by Duaa Eldeib, ProPublica August 10, 2022