2020 may go down in history as the year in which the judicial branch faced its most daunting challenges in a generation. Not only are we grappling (like everyone else) with a global pandemic, and the challenges of keeping courts open to resolve disputes while trying to ensure that we minimize the risks to the health of everyone who comes into contact with the justice system on a daily basis, but we also have a contentious election looming on the horizon.

Courts may be asked to consider requests for alternative voting mechanisms, to keep polling locations open or shut them down, and possibly even to decide disputed election results. The swirling political debates in our other branches may come crashing down onto the courthouse steps.

Are we up to the task? I can answer that question with a resounding yes, but I acknowledge that it will not be easy. The judiciary, as an institution, needs to embrace a leadership role and give the public the confidence that our actions will be governed by fairness, independence, and transparency.

That last sentence probably sounds well and good, you might say, but how do we accomplish that? The key, in my view, is leveraging what we have learned, and continue to learn on a daily basis, during this crisis. I know that in my own life, while episodes of adversity have been challenging in the moment, the vantage point of hindsight reveals that those situations proved instrumental to my growth as a person. So too the judiciary can take these lessons and utilize them to build a stronger, more robust, institution.

With that in mind, here are some things that we should focus on:

Technology: Courts across the country are utilizing technology in new and innovative ways right now. The Ohio Supreme Court instituted a technology grant program to bolster those efforts here in Ohio. Technology can alleviate a lot of problems, such as people sitting in courtrooms when they don’t have to, including those who are taking time off work to the detriment of their paycheck and police officers who would rather be on the beat.

I applaud the innovative use of technology because it makes our courts more efficient and more responsive to the public we serve, but we must also bear in mind that we cannot turn our courts into just another web portal. Courts often have a more direct impact on people’s daily lives than other governmental institutions. For that reason, we cannot disappear behind a veil of secrecy. Rather, we must balance the need for efficiency with the need for solemnity as we provide a forum where the parties enjoy confidence that their voice will truly be heard.

Transparency: The need for transparency could not be greater right now, particularly as we experiment with technological innovations. When I talk to non-lawyers, most describe going to court as stumbling into a foreign land where they don’t speak the language. Many courts now are making strides at providing guidance to unrepresented parties (and witnesses) as they navigate the judicial system, but we need to redouble those efforts. Transparency in this respect doesn’t just benefit the parties, but it enables the whole system to function better.

The point, however, is broader than that. We also need transparency in our decision-making. Judges should explain their decisions in language that the parties can understand and in a manner that reflects that their arguments were thoroughly considered. Particularly as we utilize technology to perhaps minimize time for folks sitting in court, if a party never really sees the judge and receives a post-card in the mail saying “you lose,” how will that reflect upon the judiciary? I’m certainly not suggesting that every decision needs to rival War and Peace, but parties are much more likely to trust the judiciary when they understand why the court ruled the way it did.

Mindfulness: Judges are human too, and we’ve seen the devastation inflicted by COVID-19, both on people’s health and economically. This situation cries out for flexibility, accommodation, and understanding. To that end, some courts (including the Ohio Supreme Court) have issued blanket tolling orders to suspend certain deadlines in the midst of this crisis.  And once we reach the other side, courts should be thoughtful in handling individual situations because many of the effects will linger with us for some time. The message that we should convey is that we will work with you to ensure that your case gets decided on the merits as efficiently as possible while avoiding needless red tape.

Criminal Justice Reform: I’ve been discussing how we as the judiciary approach our jobs, but now I want to shift briefly into substance. New pathways are emerging on the horizon that can fundamentally reshape certain areas of the law, and nowhere is this more pronounced than on an issue with general consensus — we need criminal justice reform.

The consensus on the broad objective sometimes breaks down once we start discussing how (see Issue One’s failure at the ballot box in 2018). Yet now we have experience (and hopefully data) based on how various courts have responded to the crisis — not just in Ohio but across the country. Some have dispensed with bond for non-violent offenders while others released inmates convicted of less serious offenses.

Like any other bureaucracy, the judiciary is often reluctant to embrace change. But the pandemic has, to a certain extent, forced our hand, and I believe that we must pick up the ball we have been given and run with it. We should cast aside old ways of doing business that have outlived their usefulness, and build a more modern, transparent, and efficient court system. I, for one, look forward to that opportunity. 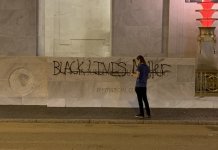