Millions of Americans, it seems, feel as if they can no longer breathe.

Through the first months of 2020, the novel coronavirus has choked the life from more than 100,000 of our countrymen and women. Disease-related shutdowns have choked 40 million more out of the workforce, changing the economic outlook for many — especially minorities — from precarious to calamitous.

Those were the circumstances last week in Minneapolis when video emerged of a white police officer kneeling for more than eight minutes on the neck of a black man who was begging to breathe. The officer didn’t relent. The man, George Floyd, cried out for his mother and died. All hell broke loose.

Days of rage have followed in more than 140 American communities. Many protests have turned violent, with downtown windows smashed, stores looted, fires set and gunfire exchanged with law enforcement.

Some local and national leaders have tried to dismiss the protests with baseless claims that they’re being driven by “outside agitators.” It’s an expression with an ugly racial history.

Worse, perhaps, is that by pinning blame for what’s happening on vague outsiders, those advancing the theory seem to be trying to excuse themselves from confronting the reality under their noses.

People are freaked out. And they’re mad. And they’re our neighbors whether we want to acknowledge them or not.

It was with a deep ambivalence that I walked past block after block of boarded-up windows in downtown Columbus Sunday afternoon.

On one hand, people are coming out and making themselves heard.

But what message is the rest of the country taking from the protests? And this time, will anything really change?

Without the fire and fury, this story would get far less attention and I strongly believe that the more comfortable of us need to spend a lot more time thinking about what life is like for neighbors we don’t really know. A lot more time.

But will the violence only teach white America that downtown and neighborhoods with people who don’t look like them are places to avoid?

My first big story was about an Indiana cop who kicked the crap out of an older black man who was cuffed and pinned to the ground. The cop got charged. Other police testified against their colleague. The jury acquitted him.

That was only a couple years after an amateur videographer in 1991 caught Los Angeles police savagely beating another black man, Rodney King. The city burned over that beating just as it had in Watts 25 years earlier.

Now most Americans have video cameras in their pockets, many police wear body cameras and recordings of improper use of force keep being made.

I was stewing over that Sunday when I fell in with the protest march downtown. That, at least, was encouraging.

The crowd was overwhelmingly young, mixed and most were wearing masks.

Young black adults took turns with a bullhorn in front of the Statehouse leading chants such as, “I can’t breathe.”

Even as other protesters and passersby cursed and flipped off Columbus police standing in the middle of Broad Street, the young leaders periodically walked out and checked in with the cops. It seemed to do much to ease the tension.

Then the group went on the march on a gorgeous Sunday afternoon around Cap Square, through Gay Street, around the square again and then up High Street through the Short North. The crowd grew as it went, stretching out over four or five or six city blocks as it ascended toward the Convention Center.

Amazed, one young man near me remarked on the number of white people. His companion, a young black woman, turned and thanked me. For being white and being there, I guess.

It might demonstrate a desperation just to be heard.

About 20 years ago, I covered a speech that the great Julian Bond gave to a convention of black ministers in Greensboro, N.C.

He implored them to let modern whites know that modern blacks don’t hold them responsible for slavery and the many other sins of the past. But it’s just as important, Bond said, for modern whites to learn about those sins and acknowledge they happened and that we’re still living with their legacy.

All these years later, there are still a lot of white people in this country who can’t bring themselves to say “black lives matter” and then just stop talking. It shouldn’t be that hard to say three, seemingly uncontroversial words.

A few of the marchers also seemed determined to ignore some realities of their own — such as the possibility that a person can be both a police officer and be appalled by what those cops did in Minneapolis.

A white man carried a sign that said “I talked with a CPD cop and he was disgusted with George Floyd’s death too.” Another man, also white, launched into a vehement, profanity-filled diatribe about how terrible all police are all the time.

Then a woman, also white, loudly berated the sign carrier for not getting with the message of the day, which she seemed to think she was in charge of.

“What is wrong with those people?” asked a young black woman who was walking next to me.

I told her they’d been carrying on like that for at least half a mile. “What is wrong with those people?” she asked again.

Contrast that with the scene at the corner of Third and Gay. A desert-brown humvee was parked with three national guardsmen and a guardswoman lined up on the side of it.

All were wearing tactical gear and watching from behind face shields.

That was ominous, I thought. This is Ohio and we have a fraught history in this state when it comes to the National Guard and civil unrest.

But then something awesome happened. A tall, young black man walked by and said something like, “Protecting the people’s right to protest. I like it.”

I turned to the trooper who seemed to be in charge and asked if he’d caught what the kid had said. The trooper nodded and matter-of-factly said, “I’d die for anybody here.”

I have no idea where we’re headed as we live through this history, but hopefully not for that. 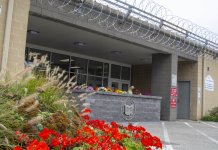