WASHINGTON — In a landmark victory for LGBTQ rights, the U.S. Supreme Court held Monday that employers can’t legally fire people because of their gender identity or sexual orientation.

In a 6-3 opinion, the court ruled that employers who fire individuals “merely for being gay or transgender” violate Title VII of the 1964 Civil Rights Act, which bans discrimination on the basis of sex and other characteristics — but not specifically gender identity or sexual orientation.

“An employer who fires an individual for being homosexual or transgender fires that person for traits or actions it would not have questioned in members of a different sex,” wrote Gorsuch, who authored the majority opinion. “Sex  plays  a necessary and undisguisable role in the decision, exactly what Title VII forbids.”

The ruling will have a profound effect on millions of LGBTQ people and their families. Nearly 5% of U.S. adults — more than 11 million people — identify as LGBTQ, according to Reuters, and large percentages report workplace discrimination. More than 40% of lesbian, bisexual and gay people — and 90% of transgender people — have faced employment discrimination based on their sexual orientation, according to court documents.

Alphonso David, president of the Human Rights Campaign, hailed the “historic” decision Monday. “No one should be denied a job or fired simply because of who they are or whom they love,” he said in a statement.

But he said more work remains. The high court legalized gay marriage in 2015, but about half of states lack statutes protecting LGBTQ people from workplace discrimination.

She pointed to legislation passed last year by the U.S. House that would amend existing civil rights law to explicitly cover sexual orientation and gender identity and make other changes. Senate Majority Leader Mitch McConnell (R-Ky.) “must end his partisan obstruction and allow the Senate to vote on this critical legislation,” she said in a statement.

Ohio Attorney General Dave Yost joined Ohio to the suit, arguing the law didn’t protect LGBTQ workers and saying the case “is about whether the judiciary gets to write new laws or if that should be left to elected legislators.”

In a statement Monday, Alana Jochum, executive director Equality Ohio, said the organization is thankful and heartened by good news from the Supreme Court.

“This ruling means that LGBTQ people have protections against employment discrimination under federal law,” Jochum said. “This is the first step of a journey and only applies to federal employment laws. LGBTQ Ohioans need the same protections here in Ohio, as well as protection against discrimination in housing and public accommodations, like stores and hotels.”

Justices heard cases last fall involving plaintiffs who argued that they were wrongfully fired because of their gender orientation and sexual identity.

Aimee Stephens — a transgender woman from Michigan — was fired after she informed her boss she planned to transition from male to female.

Gerald Bostock of Georgia and Donald Zarda of New York were fired after their employers learned of the sexual orientation. Bostock, a social worker, lost his job with Clayton County after joining a gay softball league. Zarda, a skydiving instructor, was fired after informing a customer of his sexual orientation. 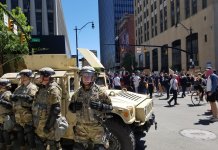