As campaign staffers unionize, legislators seek protections for their staffers

A photo of the Ohio Statehouse from Wikimedia Commons.

Democrats in the Ohio House are encouraging their staffers to unionize as they deal with what they deem a lack of communication on health and safety protocols in the Statehouse.

House Democratic Caucus campaign staff joined the United Food and Commercial Workers Local 75, according to a recent announcement by the union and caucus.

“Even political work must be subject to minimum standards,” said Kevin Garvey, President of Local 75, in a statement.

Garvey said Minority Leader Emilia Sykes and the caucus “engaged in good faith bargaining” as they agreed to a package for full and part-time employees. The protections will include guaranteed paid sick leave, paid vacation and holidays, health care benefit protection and a $15 minimum wage.

“UFCW workers have been on the front line during the coronavirus pandemic and we want to stand with them now, and in the future,” Sykes said in the agreement announcement.

Meanwhile, two other Democratic legislators hope to strike a provision from the Ohio Revised Code that bars exempted state employees, including legislative staffers, from collective bargaining.

State Rep. Allison Russo, D-Upper Arlington, and Rep. Jeffrey Crossman, D-Parma, are introducing a bill next week to do just that.

“Our staff at the Statehouse are really no different than any other worker that is navigating how to be safely at work and make a living, and not put themselves and their families at risk,” Russo told the Capital Journal.

Crossman joined in on the bill after the Statehouse had its own spate of COVID-19 cases among staffers, something he said was not properly communicated to legislators, staffers, or any other administrators within the building.

He said putting staffers’ safety at risk without proper protections isn’t the way things should be in any workplace, and those serving the public in government should be a model for transparency amid a global public health crisis.

Russo said the response to COVID cases in the Statehouse was just one of many examples necessitating worker protections. Removing the exemption for legislative staff would take away a barrier to those protections.

“If we support worker rights and safety, we should remove the hurdle,” Russo said.

House Speaker Larry Householder’s office has not responded to requests for comment on the Statehouse cases, but on Twitter, he responded to Crossman’s comments on how the cases were found. He denied keeping the information from Statehouse staff, but said the protocol “was from the HR Director to the 2 Chiefs of Staff.” 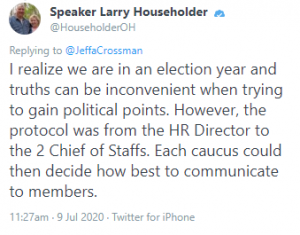 On Friday, Democrats sent a letter to Householder asking for information on the positive COVID-19 cases found in the house and a stricter policy on masks and protocols within the Statehouse.

State Rep. Jessica Miranda, D-Forest Park, wrote a separate letter regarding a legislative aide she said was “mistakenly identified” as having had contact with an infected staffer. Through a Twitter post directed at Miranda, Householder denied that account, doubling down on the fact that Miranda’s staffer was identified. 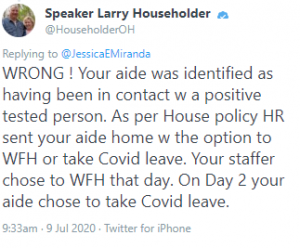 According to previous Capital Journal reporting, House staff won’t give an official number on confirmed cases, and have apparently been conducting their own contact tracing, rather than reporting to the health department.

“Ohio workers, including our staff, have a right to a safe workplace,” Miranda wrote in the letter. “The public have a right to safety at the legislature. No one should have to risk their lives or the lives of their families to interact with their government.”

As campaign staffers unionize, legislators seek protections for their staffers