Federal officials are probing actions taken in Ohio in 2017 by the largest Medicaid managed care provider in the United States, a source familiar with the investigation has told Ohio Capital Journal.

The U.S. Centers for Medicaid and Medicare Services declined to confirm or deny the existence of an investigation. But the source said the agency is looking into a finding by a consultant hired by the state to analyze billions of dollars in drug transactions in the state’s Medicaid managed-care program during 2017 and 2018.

The finding raised questions about whether Centene — a company which is not well known but is a huge player in state Medicaid programs — effectively billed the state for duplicate services while working with another of the nation’s largest corporations, CVS Health.

The potential problems found in Ohio would not be the first for Centene, The company already has faced more than $23 million in fines and lost incentives over separate issues with its performance in more than a dozen state Medicaid programs, the Des Moines Register reported in 2018.

As with most other states, Ohio’s $26 billion Medicaid program is mostly privatized. And some of the corporations that contract with the agency have long been accused of using their size and a lack of transparency to take outsized profits from a Medicaid system that is known for underpaying providers such as doctors, hospitals, dentists and pharmacists.

Experts say it’s especially critical now to make sure corporations aren’t extracting excessive profits from Medicaid, something they’ve been increasingly accused of in a rapidly consolidating marketplace. That’s because the global coronavirus pandemic is driving large numbers of new patients onto the Medicaid rolls even as the disease is squeezing the economy and sapping tax revenue to pay for the program.

The state’s Medicaid caseloads had dropped in all but two of the 18-months leading into 2020, but then they expanded rapidly when the new coronavirus hit. After increases of fewer than 10,000 in January and February, they leapt by 25,000 in March and 94,000 in April, the latest month for which data are available.

The Ohio Department of Medicaid contracts with managed-care companies to coordinate health care for almost 90% of the roughly 3 million patients in the program.

The companies, in turn, contract with doctors, hospitals and other providers. They also contract with pharmacy benefit managers, which decide what drugs get covered and how, determine pharmacy reimbursements, leverage manufacturer rebates, reconcile pharmacy claims and provide other services.

Pharmacy benefit managers, or PBMs, fight hard to keep information about how they determine drug reimbursements secret. But in the summer of 2018, The Columbus Dispatch obtained confidential reimbursement information from 40 pharmacies. It showed that the two PBMs — CVS Caremark and OptumRx — serving Ohio Medicaid’s five managed-care organizations were charging the taxpayer-funded managed-care companies a lot more for drugs than they were paying the pharmacies that had bought them and dispensed them to patients.

Then, under political pressure, the Medicaid department got the PBMs to cough up all of their reimbursement data between April 1, 2017 and March 31, 2018, and hired the consulting firm HealthPlan Data Solutions to analyze it.

Perhaps the biggest finding was that the pharmacy-benefit managers serving Ohio Medicaid charged managed-care companies such as Buckeye almost a quarter-billion dollars more for drugs than they paid the pharmacies that had dispensed them.

But in addition to that eye-popping number, the analysis also found that one of the state’s five managed-care plans, Buckeye Health, paid its PBM, CVS Caremark, through Envolve, a “pharmacy benefit administrator.”

So what did the corporations do to earn their respective shares of the $53 million they received from the taxpayers for Medicaid drugs but failed to pass along to the pharmacies?

CVS Caremark has insisted that the expenses it charged are justified and that over the long run, they’ve saved taxpayers large amounts of money. Indeed, the Healthplan Data Solutions report estimated that CVS and OptumRx saved taxpayers $145 million under what it would have cost to fill prescriptions in a fee-for-service model.

However, the consultant and state officials did not agree that taxpayers were getting a good deal from CVS, the fifth-largest corporation in the United States.

The HDS report concluded that CVS Caremark charged the state as much as $164 million above the going rate for its services to four managed-care organizations, including Buckeye, during the year that it analyzed. And the strategy — “spread pricing” — that led to the big differential found by the consultant, has been forbidden in Ohio and other states — partly in response to the report.

That leaves the question of what Envolve did for the $20 million it pocketed from Buckeye.

The HDS report noted that at 16.5%, the difference between what Buckeye, Envolve and CVS Caremark were charging taxpayers and what they were paying pharmacists was much higher than the statewide average — 9.5%. And the smaller amount had already raised much consternation.

In 2018, when the Ohio Department of Medicaid was asked what services Envolve had provided, it said “utilization management, specialty management, data analytics, drug utilization review and formulary management.”

When CVS Caremark was asked by The Dispatch if it provided services by the same names, it said it did.

That raised an important question: Were CVS and Centene/Envolve being paid by Centene/Buckeye for duplicate services?

After the story was published, CVS spokesman Michael DeAngelis modified his statement, saying Centene-owned Envolve and CVS Caremark “focus on different elements within those categories.” A more specific explanation was not provided.

“Buckeye’s data included spending on pharmacy-care coordination and other activities, or PBA (Envolve) services, in addition to the expenditures for our PBM (CVS Caremark),” she said. “Buckeye Health Plan meets or exceeds the state’s requirements as laid out in our contract and is fully committed to working with the state in a transparent and collaborative manner.”

As for an investigation into whether Centene did anything to earn the $20 million it paid its subsidiary, Ohio Attorney General Dave Yost in early 2019 declared that he was going to launch a number of actions against PBMs that do business with the state. So far the state has filed two lawsuits against OptumRx and Express Scripts. A spokeswoman for Yost didn’t answer directly when asked if her office was investigating Envolve’s payments in 2017 and 2018.

In a written statement, Buckeye also didn’t answer questions about whether it and Envolve are under federal investigation.

“While Buckeye no longer receives Medicaid PBM services from CVS Caremark, an independent analysis of PBM performance in Ohio from 2018 found that CVS paid independent pharmacies more than its own pharmacies for both brand name and generic drugs,” the company said in a statement. It was referring to the same analysis that found that Buckeye owner Centene effectively paid itself $20 million for services that still haven’t been fully detailed.

Centene has come in for scrutiny well beyond the Buckeye State.

In Texas, the Dallas Morning News reported that Centene’s subsidiary there had denied care to sick and disabled children.

And among the problems the Des Moines Register said Centene has been sanctioned include failing to promptly pay claims and not providing the poor and elderly with adequate access to doctors. The newspaper investigation also found the company paid $4.5 million to settle a lawsuit claiming the company failed to pay overtime to nurses, including in Ohio. 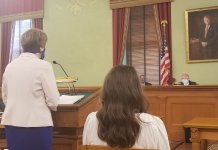 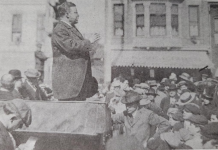 History Thursday: When the 1912 presidential election ran through one Ohio town