During a town hall at one of Columbus’ private Christian schools, U.S. Secretary of Education Betsy DeVos and two state senate leaders promoted the option of private schools as educators decide on a COVID-19 plan.

Senate President Larry Obhof went so far as to say parents should have the choice to change schools in the midst of the pandemic if their current school has decided not to go back to traditional in-person instruction.

“There might be parents who think that that’s not the best option for their children, and would prefer under those circumstances to send their children to alternatives,” Obhof, R-Medina, said. “(Including) private schools that might be open five days a week, that might have more of a traditional setting that some individual districts are choosing not to move forward with.”

The event at Tree of Life Christian School in Upper Arlington was held as a roundtable to discuss school choice, including the EdChoice program in Ohio, and support federal funding for education.

DeVos promoted the idea that tax dollars meant for students’ education should “go with them,” rather than be given to a district to decide the best use of the funding. She said the coronavirus crisis has been a shining example of the need for the parents to hold the control.

“Many parents have seen their child’s assigned school simply fail to rise to the occasion and meet the challenges of the moment,” DeVos said.

DeVos also said the decisions about reopening schools should be “left to the local community,” a statement that matches a bill state Sen. Matt Huffman, R-Lima, introduced last month to allow individual districts to decide on opening, even if it’s against the advice of health department officials.

Public school advocates say this is the second time DeVos has come to Ohio and avoided support of increasing resources to public districts.

We want all students to have a quality learning experience,” write Ohio Federation of Teachers executive director Melissa Cropper in a post on Twitter. “That’s why (DeVos) should be focusing on our under-resourced public schools especially those in low income areas serving students of color.”

Huffman also attended the roundtable with Obhof and DeVos, praising DeVos and the Trump administration for “consistency” in their education priorities. He emphasized the need for more federal funding for education, to continue Ohio’s ability to allow school choice.

“It’s an evolutionary process,” Huffman said. “It’s constantly a struggle, frankly, in the state government to make sure that we see that this school and this individual, that they’re getting appropriate funds,” Huffman said.

Education across the state has struggled, especially since millions in budget cuts were announced as part of Gov. Mike DeWine’s initial response to the coronavirus. Public schools saw declining state investment even before COVID-19. CARES Act funding was brought in to help with budget shortfalls, but public schools were ineligible for federal Paycheck Protection Program loans, from which private schools around the state benefitted. 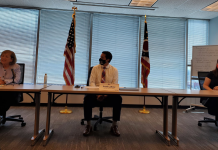