A prominent civil rights leader and anti-poverty advocate said Friday Ohio legislators need to be focused on passing bills against racism, and refocusing their religious priorities.

In a meeting with media from States Newsroom outlets across the country, the Rev. William Barber said the state and the country need to address “interlocking injustices” in order to face systemic racism and poverty inside and outside the COVID-19 pandemic landscape.

Barber is the co-chair of the national Poor People’s Campaign, president & senior lecturer of the nonprofit Repairers of the Breach and pastor and theologian in North Carolina.

He said social determinants like health care, a living wage and even fair elections are at stake if institutionalized discrimination and stigma is allowed to continue. The problems existed before the COVID-19 pandemic, he said, but persist even more now.

“We are in a situation in this nation…if COVID has done anything, it has exposed what is already there,” Barber said. “The pandemic has exposed and exploited the two great fissures of this society — systemic racism and systemic poverty.”

Ohio’s legislature has had the opportunity to discuss both of those issues, particularly in the form of resolutions to declare racism a public health crisis. The Ohio Senate version has heard multiple hearings, but the state House version was held up as the body went on summer break just after the measure was introduced.

Advocates spoke on the interlocking issues that lead to racism in the state during hearings on the Senate bill, and Barber said nothing can be done to make a change until leadership accepts that racism is a “national security issue.”

The reverend also said the priorities shown by state politicians in passing anti-abortion legislation, moving education money to private, often religious schools through the EdChoice voucher program, and bills to limit the power of public health orders during the pandemic, go against what true religious morality emphasizes.

Even more important than what current legislators are doing is the action of those being impacted by the policy. For Ohio residents, getting to the ballot box and being counted in the 2020 Census are significant parts of enacting the change.

“It’s protest, it’s policy, it’s pushing, all of that has to continue,” Barber said. 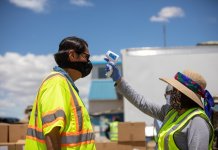