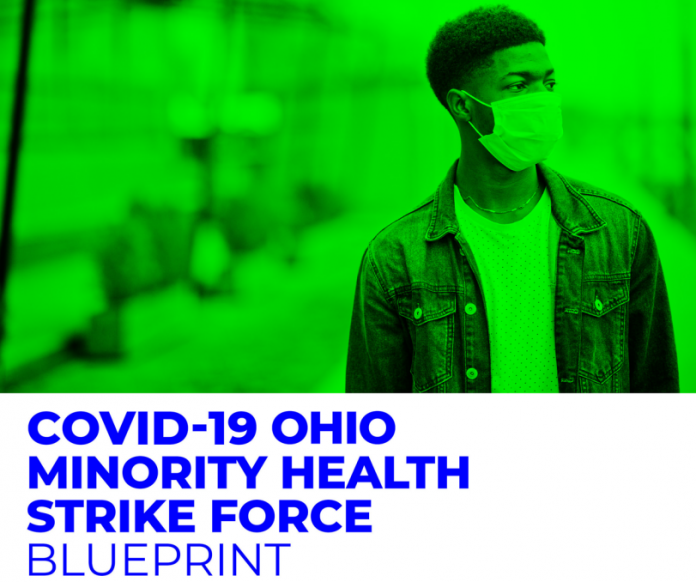 Ohio’s Minority Strike Force released their final report, which laid out how disproportionate the health care and economic lives of people of color are across the state, and laid out ways to deal with it.

The strike force was empaneled to collect information on COVID-19’s effect on African Americans and other minority populations, along with the racism and trauma that leads to worse health outcomes for those communities.

According to state numbers, African Americans represent 14% of Ohio’s population, but represent 24% of positive COVID-19 cases, 32% of hospitalizations and 19% of deaths from the disease.

The group’s report notes the framework needed to advance equity includes the categories that make up social determinants of health, those things that make up the overall health of a person and community: health care and public health, the social and economic environment and the physical environment.

The first recommendation from the group is a statewide, government-wide and community-wide acknowledgment of racism as a public health crisis.

Ohio’s legislature already has a resolution in both the House and Senate declaring racism a public health crisis, but neither have successfully passed through committee. The House version didn’t see a hearing before the body went on summer break.

Ohio Gov. Mike DeWine made several statements during his Aug. 13 press conference about the report, including stating outright that he believes racism is a matter of public health.

“There are racial disparities in Ohio…certainly in health, education, housing, and we could go on and on,” DeWine said.

The sponsors of the Senate’s proposed resolution said the governor’s comments further underscore the need for the measure.

“We have a duty to protect the lives and freedoms of all Ohioans, and that starts with addressing the glaring inequities in our health care, housing, education and justice systems,” said state Sen. Hearcel Craig, D-Columbus, in a statement. “Governor DeWine was right when he said that history will judge us for how we choose to respond to these disparities.”

House Minority Leader Emilia Sykes, D-Akron, was a part of the Minority Health Strike Force, but criticized the lateness of the final report, and the lack of action by the governor.

“For thousands of Black workers and Black families, it’s too little, too late — the damage is done,” Sykes said in a statement. “The governor and his team moved quickly to address some issues but not the ones that dealt with Black and Brown lives.”

Several of the strike force’s recommendations focused on creating cultural competency and health literacy, along with urging equitable representation in government and the private sector and a health equity lens for policy.

“The state of Ohio should support the recruitment and retention of an equitable representation of Ohioans of color in health care and public health professions in all established workforce development programs,” the report stated.

Through better representation, the strike force hopes to target those social determinants that cause increased mortality rates and comorbidities in people of color.

Comorbidities are health problems such as hypertension and heart disease that exacerbate or expand into bigger diseases. Racism and discrimination of all kinds can lead to trauma and stress, and social determinants like poverty can impact immune systems, and overall health, the strike force said.

“Comorbidities render communities of color more vulnerable to COVID-19 complications and death,” the report reads. “While protective factors, such as supportive family and caregiver relationships, social connections, and economic security can mitigate these risks, the impact of trauma and toxic stress often persists.”

Health disparities were a problem for people of color long before COVID-19 began ravaging the state and country. “Preexisting disparities” like diabetes, hypertension and heart disease were already prevalent in Black and other minority communities, and were only made worse by new traumas, the report said

With that in mind, the strike force also recommended new policies and services to address safe and affordable housing, broadband funding, access to public transportation, and criminal justice reform.

“State government leadership should formalize a partnership to identify policy reforms to reduce community violence, police brutality, and bias in policing, sentencing and other aspects of the criminal justice system,” the report stated.

In response to the strike force report, DeWine enlisted his cabinet in a “plan of action to advance equity,” which proposes an entirely new study group, the Governor’s Equity Advisory Board to “assist the state’s efforts to dismantle racism and promote health equity.”