Storm Harrington didn’t produce any evidence of a “specific nexus between himself and COVID-19,” wrote Judge Kevin Braig on May 4, denying the 30-year-old’s request for judicial release.

At the time, there were no reported cases among inmates at Madison Correctional Institution, though three guards were sick with the disease caused by the new coronavirus.

As of Monday, 218 inmates and 10 workers at Madison have active cases of COVID-19. Another 29 are waiting on test results.

That’s a small piece of the cumulative caseload within the ODRC, which has seen more than 5,600 inmates contract COVID-19 since late March, causing at least 87 deaths. More than 1,000 ODRC workers have contracted COVID-19 as well, five of whom have died.

Harrington was tested on Aug. 10. His mother, Audrey Maxam, said Monday her son still had not received his test results but is being housed with inmates who have tested positive.

“He’s in a building where all the positive cases are,” she said.

With no underlying health conditions, Harrington isn’t at enhanced risk of COVID-19, but he’s not invincible either.

Statewide, 866 people aged 30-39 have been hospitalized with the disease. Thirty have died.

But as the public health community and criminal justice reform advocates have argued for months, prisons are uniquely vulnerable to coronavirus outbreaks given the overcrowding and poor sanitary conditions inside.

Two of Ohio’s prisons — Marion and Pickaway correctional institutions — were the source of two of the country’s fiercest hot spots. Thousands of cases and 53 deaths trace to the two facilities alone.

And as Harrington’s mother pointed out, prisons are notorious for providing poor health care to inmates.

On April 1, 2018, Harrington broke up a bar fight involving his friend. He threw one punch, but at 6’3”, it was powerful enough to knock out the victim, yielding 13 stitches and eight staples in his head.

But after serving two years and five months, his mother asks, should he really stay in prison during a pandemic?

“Do I think that Storm was heading in the wrong path? Yeah, I do. He was hanging with the wrong people,” she said. “But do I think he deserves four years? No, I don’t.”

So Maxam hired an attorney, who filed a motion for judicial release.

Harrington’s attorney argued the crime stemmed from a simple bar fight. There was no gang activity or prejudice behind the attack. Harrington would live with his mother, upon release. He has a job at a concrete company lined up. He completed his GED in jail, along with anger management and other courses. ODRC scored him as a low-risk prisoner.

Gov. Mike DeWine has used commutation powers and a prison overcrowding statute to depopulate jails since the virus entered the prison system. However, its guidelines are narrow, focused on older prisoners serving sentences for non-violent crimes and nearing the end of a sentence.

Braig, a Logan County common pleas judge, cited in his written order posts on Twitter from DeWine stating that ODRC “has done a great job” preparing for outbreaks within its prisons.

He said Harrington never proved that anyone at the prison has the disease, or that Harrington is especially vulnerable to the disease.

At the time, nearly 4,300 inmates had contracted the virus, 39 of whom died. All but a handful of prisons were under quarantine.

Three guards were sick from COVID-19 at the time, but it didn’t sway Braig.

“Neither ODRC nor any other government agency has any obligation to guarantee to every person, whether incarcerated or not, that he or she will never be exposed to anything harmful in the environment,” he wrote. 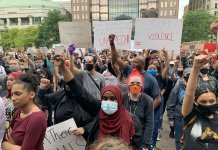 A judge denied him early release. Now there’s an outbreak in his prison