Education officials say teachers need to be given a break from annual evaluations that could punish them for a year of COVID-19 uncertainty.

Current and former superintendents, along with representatives from teacher’s associations across the state said Wednesday that significant uncertainty still remains as schools go back to various learning modes, and the idea of also completing the usual yearly checkpoints shouldn’t be a focus for educators this school year.

“Step back and let school districts find out where are we, and where we need to go, without the threat of the performance of those students impacting them negatively moving forward,” said Kevin Miller, head of the Buckeye Association of School Administrators (BASA).

Education officials were at the Statehouse to speak in support of Senate Bill 358, bipartisan legislation introduced the same day to the Senate Education Committee.

The bill would require the Ohio Department of Education to request a waiver for federally required student testing, continue the freeze on state report cards and EdChoice designations, and extend the flexibility of graduation and reading requirements afforded districts in the previous omnibus bill.

“Coupled with the normal summer losses, teachers will need to focus on getting students back on track,” Fedor told the committee. “Any pressure we can relieve so that the focus is on teaching and learning, rather than testing and evaluating, will help our students succeed in the long term.”

Melissa Cropper, head of the Ohio Federation of Teachers, emphasized the need for the suspension of teacher evaluations for the school year.

“While they have been working to adjust their teaching for remote leaning, it is unfair to assess their abilities under these circumstances,” Cropper said.

Legislators questioned the logic of removing student and teacher evaluations as a whole, arguing that the state would have no metric to determine effective learning without some form of testing.

“If I dropped you in the middle of Africa and told you to start teaching in a village without any of this stuff going on, I think probably the first question you would ask is what do the students know,” said state Sen. Peggy Lehner, R-Kettering, committee chair. “We’re somewhat in that same boat, in that we have no idea what cutting school off in March has done to kids.”

Miller agreed that federal testing, at the very least, will probably happen this year, but asked that the state take away the punitive parts of the testing, just for the year.

The bill didn’t receive blanket approval by educators. Those present at the committee presented their own amendments to be considered.

Most appreciated the changes that would be made to the EdChoice voucher system in the bill, but some expressed worries about the “purgatory” that another freeze would place on the districts with academic distress commissions.

“It is possible that Lorain (City School District) has sustained its improved score, but without some other acceptable mechanism to verify improvement, ADC schools like Lorain are stuck,” said Daniel Hilson, speaking on behalf of the district, one of three under the control of a distress commission.

Elizabeth Kirby, superintendent of the Cleveland Heights-University Heights City School district had a similar complaint about continuing the freeze of EdChoice. Kirby was back at the Statehouse on EdChoice business after being one of many who testified on House Bill 9, one concept in the long-standing fight to decide on the funding of private school vouchers.

Kirby’s district stood to lose millions in funding as students moved on to private schools, on the public school district’s dime. She said freezing the EdChoice program will not only not solve that problem, it will also not allow them to prove they shouldn’t be considered a “failing” school, therefore eligible for the vouchers.

Committee chair Lehner said she welcomes the discussion of amendments, but expects to expedite the process of legislating the bill so that districts can implement the bill sooner. 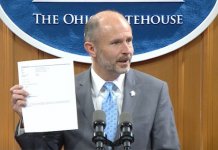