The Ohio Senate has approved a bill that would restrict the state health director from issuing broad quarantine and stay-at-home orders in battling a pandemic.

Senate Bill 311 is one in a string of bills introduced by Republican legislators this year seeking to rein in power of the Ohio Department of Health, all while the novel coronavirus has killed more than 4,000 Ohioans to date and sent thousands more to the hospital.

Legislative critics have accused Gov. Mike DeWine and the state health department’s director of overstepping their executive authority in responding to the COVID-19 pandemic. SB 311 would prohibit the state from instituting a blanket quarantine or isolation order that impacts people who have not been diagnosed with the disease in question (or have been exposed to someone who has).

DeWine and then-state health director Dr. Amy Acton issued a sweeping stay-at-home order this past spring. The order provided a number of exceptions, such as leaving home for work or to patronize a business deemed “essential.” The state defended the order as necessary to limit the virus spread.

State law gives the health director wide latitude in issuing orders to prevent the spread of infectious diseases. Sens. Kristina Roegner, R-Hudson, and Rob McColley, R-Napoleon, the co-sponsors of SB 311, have questioned that statutory authority and believe Ohioans’ personal freedoms have not been properly considered during the 2020 response.

“Quarantine and isolation are for people who are actually sick,” Roegner said Wednesday, “not for those of us who are sick of government overreach.”

SB 311 will next require approval from the Ohio House of Representatives, which has considered and passed other bills targeting the health orders put in place this year. The biggest hurdle for SB 311 is a signature needed from DeWine to become law. DeWine has vowed to veto any bill curbing the state health director’s power. He has done so once already.

Wednesday’s vote was 20-12, with all nine Democrats voting against and three Republicans joining them to vote no: Stephanie Kunze of Hilliard, Peggy Lehner of Kettering and Matt Dolan of Chagrin Falls.

“I think the governor has made prudent, very difficult decisions that have indeed saved lives, that have indeed gotten our economy up and opening,” Dolan said on the Senate floor. He added that he does not want to tie any future governors’ hands in responding to any pandemic yet to come.

‘People are dying. That’s the reality’

The Ohio Senate has not been without its own COVID-19 scares this year. Three of the 33 members have tested positive, the most recent being Sen. Bob Peterson, R-Washington Court House, who serves as the body’s president pro tem. His diagnosis was announced on Sept. 14, which also forced Senate President Larry Obhof, R-Medina, to quarantine. Both have since returned to work.

Another who previously tested positive is Sen. Tina Maharath, D-Columbus, who told fellow lawmakers on Wednesday about her personal experience dealing with the virus. She complained of her lungs still hurting and feeling out of breath at times.

“People are dying. That’s the reality,” she said. “Removing the authority of the health director will prevent us from taking prompt, life-saving actions during this pandemic.”

Another Democrat, Sen. Cecil Thomas of Cincinnati, said it would be worth reviewing how the state responded to this pandemic and how it could do better in any future crisis — but it should wait until after this one has ended.

“200,000 deaths and still climbing, all because we ended up with a politicized pandemic versus a humanitarian medical emergency,” Thomas said.

For bill supporters, though, this is less a debate about public health and more about how the three branches of government are meant to put “checks and balances” on one another.

“No matter how good the intentions of the governor were, and I believe he feels his intentions were good, I don’t doubt that,” McColley said, “but it doesn’t change the fact that the constitution remains in effect.” 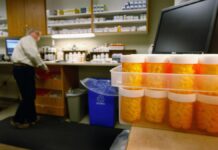