Using two different sex crime cases, the Ohio Supreme Court specified the ways in which past crimes and accusations can be used in judging the likelihood of committing current crimes.

The state’s highest court affirmed the conviction in a Hamilton County in which Michael Smith was charged with the molestation of his granddaughter in 2016. The court also affirmed the Eighth District Court of Appeals decision, but that overturned a rape conviction for Mitchell Hartman, accused of assaulting a female acquaintance in a hotel.

Both decisions were filed Tuesday, with opinions written by Justice Patrick DeWine.

Both cases regarded the use of “other-acts evidence,” evidence of past crimes or actions that attorneys argued showed a “natural tendency” for the behavior in the current crimes to have been committed by the accused.

According to legal rules of evidence, evidence from previous cases can only be used when it serves a particular purpose, like establishing motive for the crime. The evidence can’t be used “when its only value is to show that the defendant has the character or propensity to commit a crime,” as the court ruled in the Hartman case.

Hartman was accused of raping a female acquaintance at a hotel room, but Hartman never denied the sexual contact occurred, instead arguing that the contact was consensual, according to court documents.

But during his jury trial, evidence was brought forward that he had sexually abused his former stepdaughter when she was a child. In the case of the stepdaughter, Hartman pleaded guilty to abduction and attempted felonious assault.

The evidence was allowed to go forward, with the state arguing that the conduct amounted to a “behavioral fingerprint” identifying the man as a perpetrator, and a jury convicted the man.

The court of appeals, however, reversed the decision, disputing the prosecutor’s argument that the evidence established motive. In it’s Tuesday decision, the Ohio Supreme Court agreed.

“The supposition that proposed other-acts evidence, if true, would be relevant is not a license for courts to allow the jury to consider every unsubstantiated accusation,” DeWine wrote.

The state supreme court ruled with the appeals court that the details of the past crime were not related enough to be considered as establishment of motive or pattern.

The court mentioned Smith’s case in the Hartman decision, saying they would use both cases “to help clear up some of the confusion that exists regarding the use of other-acts evidence.”

In Smith’s case, the prosecution wanted to introduce evidence of previous molestation charges against another family member when she was a child, for which Smith was acquitted. That evidence was allowed in the trial regarding his granddaughter, where he was ultimately convicted of gross sexual imposition and disseminating matter harmful to a juvenile, but acquitted of rape.

The conviction was upheld by the appeals court, which said the evidence from the previous accusations against Smith showed “motive, intent and absence of mistake,” court documents stated.

The high court said the trial court was wrong to allow the evidence to be presented.

“Nonetheless, we agree with the other part of the trial court’s assessment — the evidence was admissible to show an absence of mistake,” DeWine wrote in the opinion.

The supreme court said the two decisions should be used to give courts a clear idea of what evidence of past crimes should be considered admissible and when. The justices also cleared up future jury instructions related to evidence.

“As explained in Hartman, going forward courts should tailor their instructions to the particular uses that are relevant to the case and explain to jurors in plain language the permissible and impermissible inferences that may be drawn from other-acts evidence,” DeWine wrote.

The justices unanimously agreed in both cases, with Judge Lisa L. Sadler sitting in for Justice Melody Stewart in the Hartman decision.

What would you ask Trump, Biden? These Northwest Ohio voters have ideas 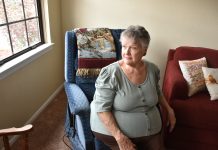 Toledo-area voter has strong opinions, those play a role in circle of friends