An organization representing more than 23,000 police officers, including school resource officers, says allowing teachers to bring guns to school under only a concealed carry permit could do more harm than good.

The Fraternal Order of Police of Ohio said this in a brief to the Ohio Supreme Court, which is considering a case that would keep schools from allowing a firearms authorization policy. The police organization said they were not taking a stand on whether teachers should be armed, but rather the training involved.

“An interpretation holding that a school resource officer or security guard needs extensive training to carry a gun in school, but the art teacher does not, is neither just nor reasonable,” the group said in a brief to the court.

“A teacher who carries a weapon into a classroom while teaching is, quite literally, both ‘armed’ and ‘on duty,’” the organization stated. “There is no reason to depart from this plain language because it yields a ‘just and reasonable’ result, as the Revised Code demands.”

Agreeing with the language, a group of 284 current or former Ohio teachers or school staff members said the law was “unambiguous” in its explanation of the training requirements needed to bring guns to schools. The teachers and staff don’t say school districts should be banned from creating weapons policies.

“But the General Assembly has required that, should they elect to arm teachers, school districts must ensure that they have adequate training, which the legislature has determined was satisfactory completion of an approved basic peace officer training program,” the brief by the teachers and staff stated.

The FOP even went so far as to say the Madison Board of Education’s interpretation “would get people killed.”

In arguing against the firearms policy, the police officer’s group brought up gun-retention skills, accuracy in a gunfight and situational awareness that they say would decrease if teachers were given the responsibility of defending themselves and others in a school shooting.

The brief to the court also said a lack of training would make armed teachers a liability, causing law enforcement to have more difficulty stopping an active shooter, and “may get themselves shot in the process.”

“If nothing else, police officers train on the ‘mental preparedness’ necessary to take a life,” the brief stated. “But in the context of a school setting, undertrained teachers will be mentally unprepared to kill one of their own students.”

Several others submitted document in support of a decisions that keeps gun policies out of the board’s hands, including the Ohio Education Association and the Ohio Federation of Teachers. A group of “experts in school safety and firearms training,” including Dayton Police Department Chief Richard Biehl, a former leader of the Columbus Division of Police Training Bureau and a former Madison Local School District teacher who became a police officer after the 2016 school shooting there, joined in the support of the parents against the firearms policies.

The cities of Columbus and Cincinnati also filed briefs showing their interest in the case, and support of the present law on training of armed personnel in schools.

If an Ohio Senator has his way, the law will change regarding armed personnel in school. The bill passed the Senate Government Oversight & Reform Committee, and is awaiting a full floor vote before moving on to the Ohio House. 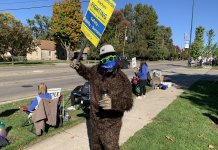