In recent years, The Washington Post newspaper has leaned on a catchy slogan: “Democracy Dies in Darkness.”

That was almost literal a century ago in the Ohio Statehouse.

In March 1920, Senate custodian E.S. Bryant directed a few workers to inspect the dark ceiling of the legislative chamber.

“(W)orkmen found that the ceiling of the chamber is largely composed of glass,” The Marion Star reported,” but that it was so thickly covered with dust and debris that the fact never was known to this generation.”

The Statehouse had been completed six decades before, so none of the 1920 legislators or staffers had much knowledge of its original construction.

The Star reported that the ceiling had not been cleaned since the building first opened in the 1850s. Four truck loads of dirt were removed from the building.

Bryant even had good news for taxpayers. The Senate planned to keep the lights off during any daytime session and instead rely on the natural light through the glass. The state would save money with this discovery, Bryant reasoned.

We imagine the custodians have been a bit more attentive in the 100 years since. 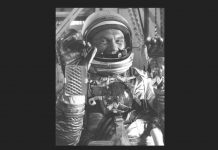 History Thursday: A surprising 1920 discovery at the Statehouse