In the last decade, millions of registered voters across the country have been removed from voter rolls.

This practice, known as list maintenance, is required by a federal law — the National Voter Registration Act (NVRA).

Some of those removals came after voters moved or died. It’s in the best interest of states to keep their lists up-to-date because it saves time and money, preventing poll workers from sifting through a long and inaccurate list. It’s in the best interest of voters because if elections administrators know where you should be registered to vote, they can send accurate information about what is on the ballot.

“What’s often lost in list maintenance, it’s often an enfranchising practice,” says David Becker, executive director of the Center for Election Innovation and Research. “If you’re updating voter lists and trying to identify people who have moved in the state and find them at a new address, you’re enfranchising those people.”

But the problem, according to election experts, is the combination of sometimes inaccurate data and political polarization have made an important tool for increasing election efficiency a partisan exercise that often leads to discrimination.

The NVRA provides some safeguards to voters. In most states, if a voter doesn’t vote in two elections they are listed as inactive and sent a mailing, asking if they still live at that location. If the mailing goes unresponded to and the voter goes four more years without voting, they can be removed. If at any point while this clock is running the voter casts a ballot, they’re put back on active status.

Some states though, like Wisconsin and Minnesota, aren’t subject to the NVRA because they have same-day voter registration. This means those safeguards aren’t available.

“You have to have a real reason,” says Paul Smith, a Georgetown Law professor. “It’s a balanced policy, states have to do a good job to keep the lists up to date but you can’t just kick people off. What you see is people around the country fighting purges because they see them as aggressive and other people pushing states to purge, a left-right divide.”

That left-right divide raises the temperature on any effort to maintain the voter rolls, but even without the polarization, the process can be imperfect and can have real harms when people are wrongly removed.

When mistakes are made in the maintenance of voter lists, that harm disproportionately touches two groups that are likely to sit out a few elections and to frequently move — Black and Brown communities and young people, according to a report from the Brennan Center for Justice.

Purged voters are more likely to live in jurisdictions that were previously covered by preclearance requirements of the Voting Rights Act. Those requirements meant that states and counties with histories of racially discriminatory voting laws needed to get permission from the federal government before passing new voting laws.

That provision of the VRA was stripped by the U.S. Supreme Court in its 2013 Shelby County v. Holder decision. Since that decision, voter purges have skyrocketed, a Brennan Center report found.

Georgia, one of the states previously under preclearance, has canceled more than 1.4 million voter registrations since 2012. And ahead of the 2018 race for governor, then-Secretary of State Brian Kemp’s oversight of the election he barely won drew criticism and lawsuits from Democrats who still complain that he used his office improperly to defeat Democrat Stacey Abrams.

Stacey Hopkins was among those that Georgia tried to strike from the voter rolls before the 2018 election.

On July 3, 2017, Hopkins says she went to check her mail and found three mailers saying she’d be moved to an inactive voter list if she didn’t respond within 30 days.

Except Hopkins had moved within her county, which means she legally shouldn’t be removed from the voter lists. To her, the mailers were a representation of the system’s history of working against Black people.

“My brain exploded,” Hopkins says. “I knew exactly what I was looking at, they really are going to try me. It was very hurtful. I’m a Black woman, when I was born in 1963, technically I did not have the right to vote. Civic engagement was ingrained in me, growing up watching the civil rights movement unfold. That was very important to me.”

Hopkins was regularly involved in voter registration drives and get-out-the-vote efforts, she was not an inactive voter, so she quickly sent a tweet and eventually got a call from the Georgia ACLU, which filed a lawsuit on her behalf.

Hopkins says she wanted to protect other voters who wouldn’t have known what they were looking at, especially in an election year.

“The purge I was involved in was the governor’s election where the former Secretary of State was vying for governor against Stacey Abrams,” Hopkins says. “There was a lot in it for him. He was the referee and the player in his own race. It was difficult to watch all of this go down. It’s infuriating to know that despite having legal action, those in charge of the law blatantly disregard it and are themselves lawless. That’s not what democracy looks like.”

An error rate as small as 8% would have wrongly removed the number of voters Kemp won by.

Hopkins says she doesn’t know how she ended up on the list, just that it was a mistake.

Mistakes in the data do happen, but they are often compounded by conservative activist groups trying to force voter purges in the name of preventing voter fraud — despite scant evidence of fraud existing in any aspect of U.S. election administration, let alone fraud caused by a dead person remaining on the rolls.

“There’s an aspect of this that’s intentionally reading the rules to silence the power of Black and Brown voters in particular,” says Chiraag Bains, director of legal strategies at Demos, a New York-based left-leaning think tank. “That’s a strategy we’ve seen engineered by the right wing — sloppy, large scale purges with no notice to voters.”

“[It’s] private right wing groups deploying a national strategy of litigation to purge the voter rolls, he continued. “Focusing on counties with high numbers of Black and Latinx voters.”

For example, in Wisconsin, the Wisconsin Institute for Law and Liberty (WILL) is currently in court trying to get the state to remove nearly 130,000 people from the voter list.

In 2019, the Wisconsin Elections Commission (WEC) voted not to remove people from the list until 2021 because of problems with the data potentially wrongly removing voters from the rolls before the 2020 election. WILL sued anyway to get those people off the list right away.

“The bottom line is that WEC has a duty under state law to maintain the voter registration lists,” WILL states in a court filing.

In oral arguments in the case, WILL lawyer Rick Esenburg argued that the list is 5% incorrect, which is fine — even if it could result in 6,500 people being wrongly removed from the rolls.

“Wisconsin is a good example,” Bains says. “The lawsuit brought by WILL, the whole purpose of it was to purge voters from the rolls. The Wisconsin Elections Commission knew pursuing a purge of that nature would kick thousands of people off the rolls incorrectly. The purge would land hardest on the counties where three quarters of Wisconsin’s Black residents live. That particular purge is going to have a racially disparate impact.”

Bains added that it’s not just Wisconsin, saying Black voters in Cincinnati were two times more likely to be targeted by a purge than Ohio’s white voters.

States across the country regularly remove voters from their rolls. The key to doing this without disenfranchising people is to have accurate data to determine who has moved and who has died. This isn’t as easy as it would seem.

Sometimes the data can look like a voter has moved when in fact they haven’t. Perhaps they registered a vehicle with the DMV at a relative’s address, making it seem like they live somewhere different from their voting address.

A number of groups have been created to attempt to track these things and build a credible database that states can use to keep voter lists current — with varying levels of success.

The Interstate Crosscheck program, developed in Kansas in 2005, was full of errors because it only used first and last names and birthdates to confirm someone had moved. Use of the program was suspended after a successful lawsuit by the ACLU of Kansas.

More recently, a number of states have moved to the Electronic Registration Information Center (ERIC). Thirty states, including Wisconsin, Ohio and Georgia, have joined the ERIC system.

Ohioans can check voter registration and find Election Day polling locations here. If voters find they’ve been improperly removed from the rolls, voters can update their registration information here, though they may be required to cast a provisional ballot.

ERIC isn’t perfect, the data it receives from the government to match addresses can be flawed. Because of this, the Wisconsin Elections Commission voted not to remove voters from the rolls until 2021 precisely because it suspected there were errors with the ERIC list, but most election officials say the system works and is responsive to mistakes.

This close to the presidential election, experts are mixed on the effects unnecessary purges may have on voting. On one hand, any efforts to make voting more complicated can drive down turnout. But states subject to the NVRA can’t remove voters from the rolls this close to an election so any purges have already happened and voters have time to check their status.

“Voter lists have gone under whatever maintenance they’re going to undergo,” Becker says. “Voter registration dates are already upon us. If there has been a law on the books since 2019 and you’re bringing a lawsuit about voter registration after Sept. 21, you’ve failed the voters. Because even If you’re right it’s too late and if you’re wrong you’re only adding to voters’ distrust of the process. I don’t expect much of this to have an effect on the 2020 election.”

This late in the game, Becker and Bains say, the energy needs to be put toward checking people’s status and getting them registered to vote.

Stanley Dunlap of the Georgia Recorder, C.J. Moore of the Michigan Advance and Marty Schladen of the Ohio Capital Journal contributed. 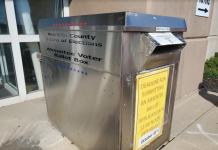 Here is where to drop off your Ohio absentee ballot

List maintenance or voter purges: How the practice of maintaining voter lists became so polarized