Four in five members of the Ohio House of Representatives were elected by “the deep state,” according to GOP state Rep. Nino Vitale.

The lawmaker made the remark in a Facebook comment in response to his own post, which misleadingly and incorrectly suggests the Ohio Department of Health will force state residents to take a COVID-19 vaccine if and when it becomes available.

“80% of the people in the statehouse were elected by the deep state,” he said. “The deep state put thousands of dollars into these candidates, they spike their name ID, lie about what they stand for, then the voters vote for them, thinking they are making a choice. That is who I serve with.”

As of Sunday, his falsehood about vaccines remains on his Facebook page and has been shared by nearly 1,000 people.

The comments mark a shift in Vitale’s targeting from his usual enemies of contract tracers or Microsoft co-founder Bill Gates to his legislative colleagues, which are predominantly fellow Republicans.

The term “deep state” refers to the allegation that there is a body of people, typically said to be influential members of government agencies or the military, believed to be involved in the secret manipulation or control of government policy. 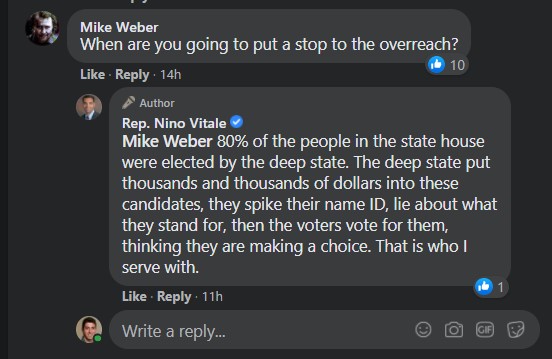 In Vitale’s post, he seizes on an email Ohio Department of Health Director Lance Himes wrote to potential vaccine providers to alert them to an informational webinar.

In the email, Himes notes the strategy plan the department rolled out to distribute the vaccine is a draft framework outlining “how to implement mandatory requirements” once more details of the vaccine are known.

A plain reading of Himes email does not imply anyone will be forced to take a vaccine. The phrase referred to requirements of providers, like storing the vaccine at “ultra-cold” temperatures of below 100 degrees Fahrenheit before administering it.

Both Himes and Gov. Mike DeWine said this week that Ohioans will not be forced to take a COVID-19 vaccine. ODH Spokeswoman Melanie Amato re-affirmed as much in an email Friday.

“The governor or the Ohio Department of Health will not be requiring anyone to get the vaccine,” she said. “Again, this email referred to mandatory requirements for providers who choose to administer the vaccine.” 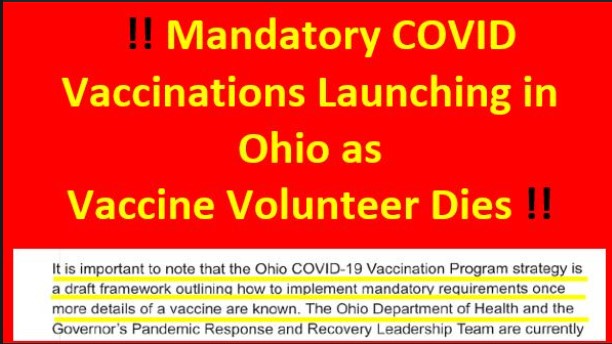 Bloomberg News reports one person in the control group (meaning he or she took a placebo vaccine) in a AstraZeneca COVID-19 vaccine clinical study died. This prompted the company to halt the trial.

Facebook’s press shop did not respond to inquiries regarding why the company allows Vitale to use its platform to disinform people about COVID-19 or vaccine safety during a pandemic.

A spokeswoman for House Speaker Bob Cupp, R-Lima, did not respond when asked the same, or about Vitale’s allegation that most Ohio lawmakers were elected by the “deep state.” Vitale did not respond to inquiries.

Vaccine requirements in Ohio are generally under the legislature’s control.

Current Ohio law requires children to receive vaccines for 10 infectious disease to attend public school. Exemptions are allowed if the child had the disease in question and developed immunity, is medically unable to take the vaccine, or if the child’s parent declines vaccination for “reasons of conscience, including religious convictions,” according to a brief from the nonpartisan Legislative Service Commission.

Ohio is one of 15 states that offers a philosophical vaccine exemption.

Currently, Ohio employers can choose to make hiring or firing decisions based on an employee’s decision to abstain from vaccination. Lawmakers introduced House Bill 268 to ban this practice, but the proposal stalled.

The Ohio Capital Journal reported in August that some of the most powerful people in the Legislature, including House Health Chairman Scott Lipps or Speaker Pro Tempore Jim Butler, openly harbor anti-vaccine worldviews.