As the dust settles for election 2020, not much is going to change for the state of Ohio. It looks like Republicans are poised to pick up seats in the Ohio House and maybe even the Ohio Senate and of course the Governor’s office will stay in their hands with no election this year. Heck, even ousted Ohio House Speaker Larry Householder won reelection — while facing felony criminal conspiracy charges from the FBI!

Despite the stasis at the state level, the likely change in federal administration may present new issues for the state to address.

For one, a Biden administration may revive regulations such as the Obama-era “clean power plan” which require states to reduce carbon emissions from power plants over time. If this happens, state leaders will likely not be lucky enough to be bailed out by technological change to hit these benchmarks.

This means they will have to create a plan to reduce carbon emissions through an old-fashioned renewable portfolio standard, requiring power companies to adopt clean technology, or through more market-oriented strategies such as carbon pricing or cap-and-trade.

If Democrats win two special Senate elections in Georgia — an unlikely scenario at least at the moment — Congress may even get in on the fun with new requirements. A slim one-vote lead would probably not result in “Green New Deal” level regulations, but more modest regulations could be in the making under this scenario.

The more likely scenario of divided government with a Mitch McConnell-led Senate negotiating with Biden and Nancy Pelosi presents a different challenge for Ohio: fiscal stability.

Economists don’t expect the national economy to recover to 2019 levels for over a year. This means state sales and income tax will continue to lag, which will threaten budgets for state education and health spending. McConnell has been very public with his opposition to aid for state and local government, so unless some moderates like Susan Collins are willing to break with their party to pass state aid, Ohio will have to dial back its spending for the next couple of years, which likely would mean public-sector layoffs.

If Democrats eke out a victory in the senate and pass aid to states, Ohio will face a different dilemma: spend money on state programs or dole it out directly for relief for businesses or families? There are philosophical, empirical, and political disagreements that could have such a pot of money pushed one way or the other.

A final policy area that has an outside chance of putting a new problem in front of state policymakers is health care. If Democrats picked off the last two seats in Georgia or were able to pull a Collins or a Murkowski into their camp for a popular program like a public option, they may kick it to the states to figure out what that would look like. In that case, Ohio could be in the position of designing policy to further reduce the rate of the uninsured.

So yes, the composition of Ohio’s government won’t change much in 2021. But election 2020 is likely to have an impact on the issues state policymakers will be facing nonetheless. 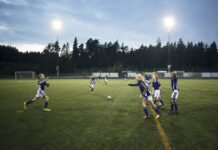 Federal election results could mean new challenges under the dome