History Thursday: When news of the World War I armistice hit Ohio

With bold-faced, all-caps headlines and words the size of your fist, Ohio newspapers on the morning of Nov. 11, 1918 trumpeted bulletins heard all ‘round the world.

WAR IS NOW OVER, the Scioto Gazette in Chillicothe blared. GERMANY OVERCOME, PEACE IS DECLARED, read the Fremont Daily News.

News of the armistice reached Washington, D.C. very early in the morning, which was then disseminated on the newswires to papers all across America. Then came the rush for outlets to be the first printed paper in town with the story.

Sometimes this rush led to newspaper competitiveness and trickery. The Akron Beacon Journal accused its competitor, the Akron Times, of stealing its reporting on the armistice signing. A Times employee needing confirmation on the story allegedly called the Beacon Journal newsroom pretending to be a local hotel inquiring about the war news. When a Beacon Journal newsman confirmed the armistice story over the phone, the Times sent word to its presses to go ahead.

Fighting ended in Europe at around 5 a.m. in Ohio time. By the time Ohioans woke up that Monday morning, the war was over and newspapers had the whole situation laid out for them.

It was also announced that draft calls would be immediately suspended, with no more Americans to be inducted into the army. This order also applied to newly-inducted men that were about to head over to Europe for service.

After years of fighting, Ohioans were ready to celebrate peace. Cities across the state organized parades and festivities, with organizations such as the Red Cross getting special honors. 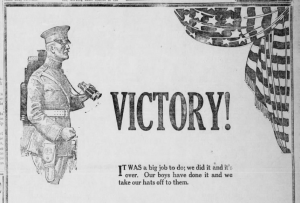 These were to be jubilant, but sober gatherings. The state’s liquor license board sent a request to all Ohio bars to close at noon and stay closed for the rest of the day.

“The request was designed to add to safeguards against unlawful conduct among persons celebrating the signing of the armistice terms by Germany,” the Akron Beacon Journal reported.

The country was, at that time, still struggling to contain the spread of the Spanish Flu. Newspapers advertised medication such as Munyon’s Cold and Grippe Remedies from Philadelphia, which implored readers to “safeguard yourself and avoid the undermining disease of Spanish Influenza…”.

Companies had pro-American ads at the ready for when the armistice was signed. In the Nov. 11, 1918 newspaper, the Akron Dry Goods Co. paid for an ad reading, “VICTORY! It was a big job to do; we did it and it’s over. Our boys have done it and we take our hats off to them.”

A message from the C.H. Yeager Company in Akron was more reflective.

That the World War Is Over

Sad for those who have given their lives that the peoples of the earth might live free and in peace from the tyranny of autocracy forever.

We are GLAD for the living who shall return to their homes and loved ones in due time, with all the honors and glory a world can bestow.

Let Us Rejoice Today–In This Hour of Gladness and Sadness

History Thursday: When news of the World War I armistice hit Ohio