Mailbag: What is the process for Ohio redistricting in 2021?

“I know questions about redistricting have been answered broadly but I’m interested in every detail. I remember something about the numbers and program being available to the public to submit district plans. Did I dream that? What are the exact rules and processes?” – @KeMowelli, on Twitter.

“Curious as whether a process for redistricting has been laid out yet?” – @MElliottRadio, on Twitter.

Answer: The redistricting efforts in Ohio will take place next year. It can seem complicated at first glance, but it’s a relatively straight-forward process that is well worth your time to follow.

As you might know, redistricting can become very controversial when maps are drawn to disproportionately benefit certain political parties and candidates. I’ve written before about how Ohio’s congressional districts are gerrymandered to broadly benefit the Republican Party (though, to be sure, incumbent officeholders of both parties reap the rewards of the map as currently drawn).

The process of redrawing these maps has changed greatly since the last time Ohio went through it. Citizens approved new systems for drawing both the General Assembly districts and the congressional districts.

Here are some key takeaways for you to know:

I created flow charts which outline these redistricting processes. Included are some deadlines that officials have to follow in order for these maps to be ready for the 2022 election cycle. (You can zoom in to view the flow chart in close detail.) 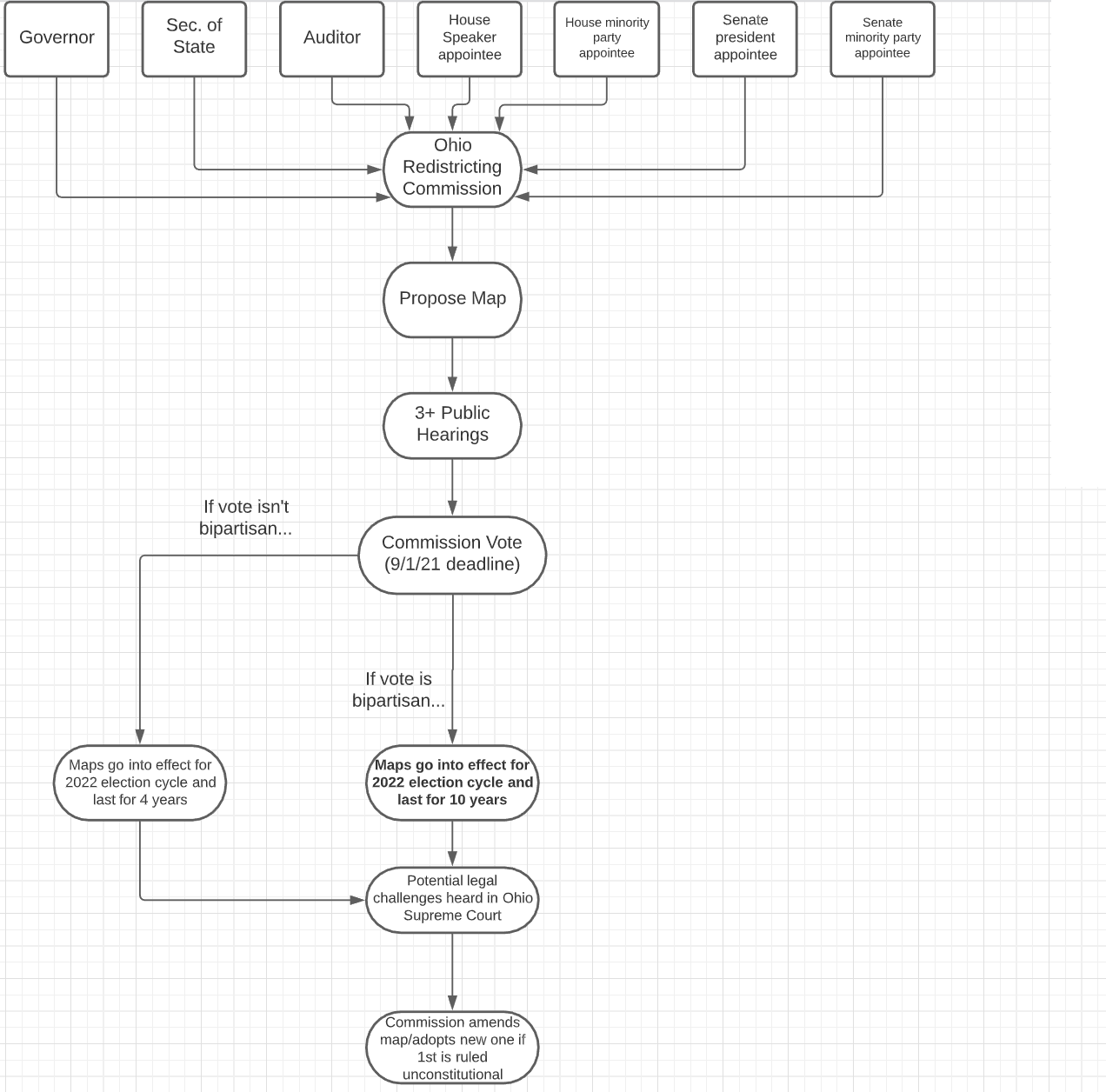 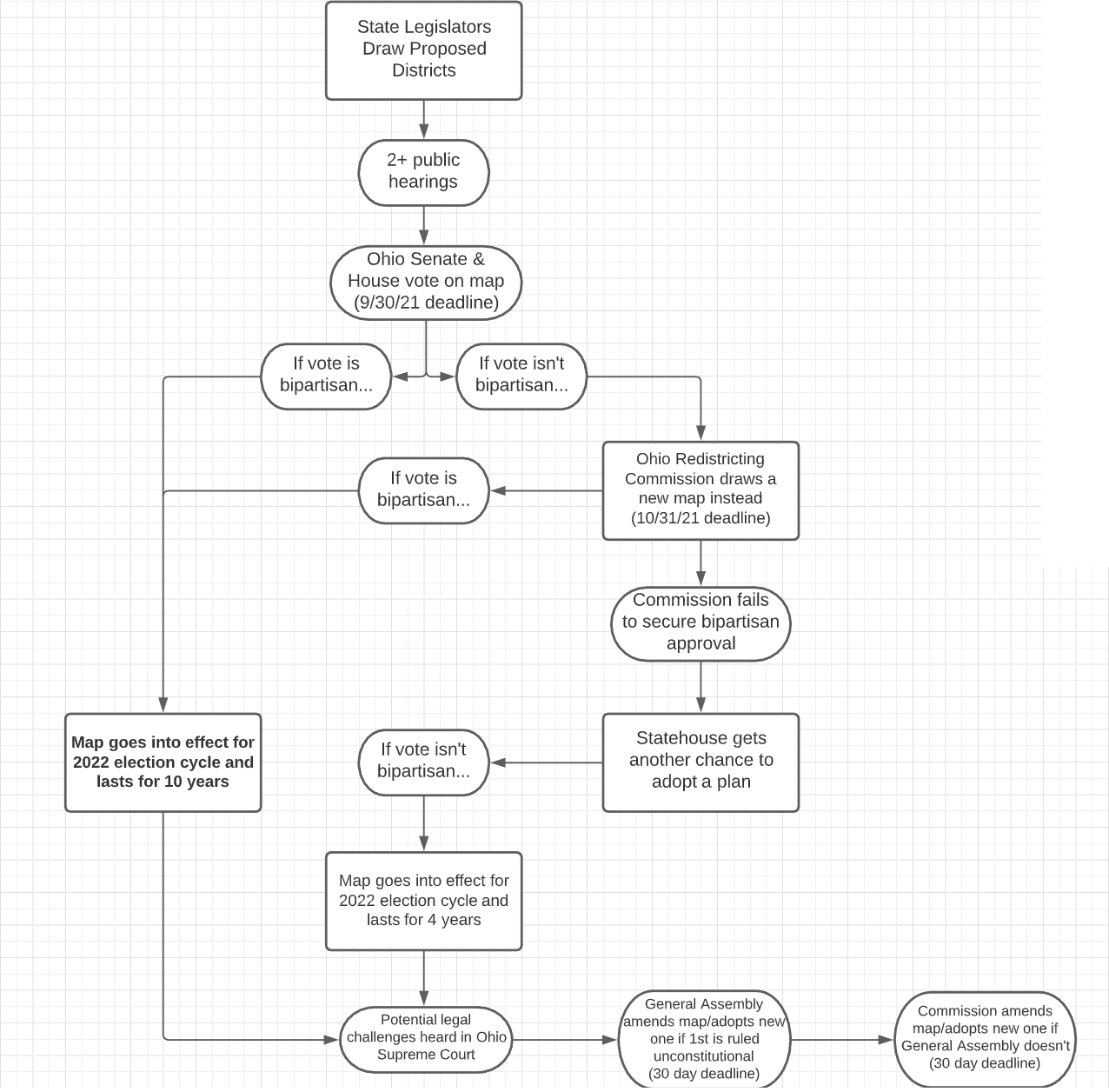 There’s a long road ahead, and Ohio Capital Journal will be following the redistricting efforts closely over the coming year. We’ll be detailing the members of the Ohio Redistricting Commission; the map proposals and how they compare to the former maps; the votes taken; and any legal challenges that may arise after the maps are adopted.

“I was wondering about the history of contested coroner races. I know there was one this year in Adams County, but how frequently are coroner races contested, and if they have debates, what are the main topics in those debates?”– @manthello, on Twitter.

Answer: There aren’t many contested coroner races in Ohio, but those that happen tend to be matters of life and death.

All 88 counties have an elected county coroner. Why is it an elected position? Beats me, but state law requires a county coroner to be a licensed physician. Once elected (or appointed), they have to complete 16 hours of training programs put on by the Ohio State Coroners Association. Some say the OSCA conferences are lively affairs, though personally attending one would bore me to death.

Hoping to learn more about the history of coroners, I perused the OSCA website. Did you know a physician named Antisius examined the dead body of Julius Caesar and ruled that a specific wound to the thorax caused his death? That’s going to come in handy as a contestant on Jeopardy! some day.

As for how many contested coroner races there were in 2020, the answer is seven.

Seven contested races out of 88 counties may seem like a small number.

As for the debates, I think back to covering county fairs and watching 4-H exhibitors have to identify animal body parts during the barn shows. I sort of wish a coroner debate featured the two candidates having to name all the bones or something.

The Warren Tribune-Chronicle reported on its contested county race, with the candidates referring to their medical backgrounds and experience. The two said “they want to create and promote education programs to address suicide and substance abuse disorders.”

There was a real humdinger of a coroner race in Muskingum County. Incumbent coroner Charles Feicht planned on retiring, the Zanesville Times-Recorder reported, but instead decided to run for re-election.

I guess when you’re the coroner, you have to trust your gut and play things by ear. Feicht may have had cold feet early on, but he ultimately had a change of heart and stuck his toe back in the race. Being the incumbent, you’d think Feicht had a head and shoulders advantage over a newcomer. But opponent Seth Vensil proved to be no candidate to look down your nose at, and wound up being an electoral Achilles Heel.

In the end, the results proved to be a sight for sore eyes for Vensil, who legged out a victory in November. And those are all the body part euphemisms I can come up with … at least, off the top of my head.

Dontavius Jarrells is ready for the Ohio Statehouse – This feature story profiles Dontavius Jarrells, the representative-elect for the House 25th District. I wrote about Jarrells’ upbringing in the Hough neighborhood of Cleveland his compelling journey to becoming a state lawmaker.

Ohio’s anti-vaxxers shift aim toward COVID-19 laws – Anti-vaccine activists have been involved in the COVID-19 debates at the Statehouse and in the courts, reporter Jake Zuckerman writes.

Mailbag: What is the process for Ohio redistricting in 2021?