If approvals go according to plan, Ohio will get more than a half-million doses of coronavirus vaccine between Dec. 15 and the end of the month, Gov. Mike DeWine said on Friday.

While more than expected, the amount is far from adequate in a state with a population approaching 12 million.

“The race has started and it’s started in a very robust way,” said Bruce Vanderhoff, medical director for the Ohio Department of Health.

Even so, officials had to make some painful choices about who would be first in line for a first dose, to be followed by a booster either three or four weeks later, depending on the vaccine, DeWine said.

That means prisons and jails, where inmates and staff have been dying of covid since the start of the pandemic, will not be among the first to be vaccinated. Nor will service workers such as grocery store clerks, who potentially are exposed to the virus every day.

“We have not gotten beyond (determining who will be in the first group) but the goal will be to save the most lives,” DeWine said on a day when more than 10,000 new coronavirus cases and 129 more deaths were reported.

Among those in the first group will be:

DeWine stressed that the exact number of doses won’t be known until the week they’re due to arrive. He added that as initial rounds are doled out, they’ll be paired with boosters to be sent later.

Joseph Gastaldo, director of infectious diseases at OhioHealth, said the vaccines awaited in Ohio are being made by Pfizer and Moderna. They still are awaiting final approval by independent panels of experts working under the auspices of the U.S. Food and Drug Administration and the Centers for Disease Control and Prevention. That approval is expected in the next two weeks.

Approvals of other vaccines are hoped for, but there are a few factors that make it hard to predict when a big enough portion of the Ohio population will have been vaccinated to it difficult for the virus to spread.

One is that about half of Ohioans are reluctant to get it, DeWine said. He said he hopes public information campaigns and news of the vaccines’ safety and efficacy will counteract the skepticism.

Also, it’s unclear what other vaccines might be coming online, how quickly, or how fast production and distribution can be scaled up. Add those together and it’s uncertain when average folks can line up for a shot in the arm.

“I don’t think anyone knows that,” DeWine said. 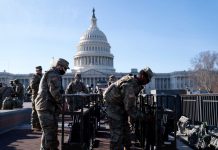