An Ohio man who kicked in a reinforced window shutter at the U.S. Capitol during the violent insurrection Jan. 6 was arrested in connection with his role in the raid.

Footage from the crowd captures Troy Faulkner, of Whitehall, kicking in a reinforced window shutter that prosecutors say was worth $1000.

While Faulkner turned himself into the FBI, it was only a matter of time before authorities would identify him — he wore a sweatshirt with “Faulkner Painting,” his personal business, on the back, along with the company phone number.

As federal authorities noted in charging documents, he also essentially admitted to the allegations in an interview with this outlet.

“I knew I shouldn’t have kicked in the window,” he said earlier this month. “I was upset and wasn’t thinking rationally.”

During the window kicking, a man in the crowd can be heard yelling “traitors get guillotine,” referring to the French Revolution era machine used for beheadings. Elsewhere around the Capitol that day, rioters would assault some 140 police officers.

Molotov cocktails were found on the Capitol grounds. Pipe bombs were located blocks away at the headquarters of both the Democratic and Republican party offices.

In charging documents, authorities cite two consecutive posts Faulkner made in response to the same Facebook comment about the day’s events, in which five people died including an officer with the U.S. Capitol police.

The window shutter Faulkner kicked in costs more than $1000 to replace, prosecutors say.

He is one of at least eight Ohioans who have been charged in connection with the riots. 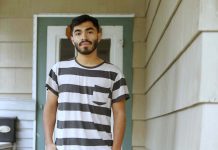 Millions paid out to Ohioans who were wrongfully convicted, imprisoned