Stock photo of home schooling during the coronavirus pandemic. From Getty Images.

A study done by political science researchers at the Ohio State University showed a significant loss for third-graders in the area of English Language Arts caused by pandemic learning.

The study, released by the John Glenn College of Public Affairs used data from the fall administration of the third-grade English Language Arts assessment in an effort to analyze student achievement through the COVID-19 pandemic. 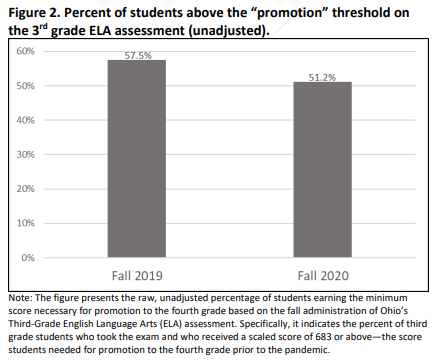 One of the major findings of the study showed that achievement by third-graders declined, with the amount of students scoring “proficient” falling by about 9% and students getting a score that would have allowed them to be promoted to fourth-grade in pre-pandemic assessments down by 8%.

“(The decline) is roughly equivalent to one-third of a year’s worth of learning,” the study stated.

Black students saw test score declines much more than those of white students, nearly 50% larger, according to the study, and economically disadvantaged students “also fell more than scores of students not identified as such.”

While the results showed significant declines in English Language Arts testing, the declines weren’t universal. The study said more than 10% of districts, more than 60 total, had no test score declines.

“A substantial portion of these student achievement impacts are tied to how significantly COVID affected unemployment, with larger test score declines in areas that experienced the sharpest job losses,” the study findings showed.

Also shown was a larger decline in districts that were fully remote to start the year, rather than using a hybrid method or in-person classes.

The study acknowledged that because testing requirements changed amid the pandemic, participation in the third-grade ELA assessment went down 14%, from 95% in fall 2019 to 81% the next year.

While the Ohio Department of Education didn’t commission the study, a spokesperson for the department said the ODE “worked closely with them on it.”

The department sees the information as an important dissection of learning, even in one specific subject, to show what adjustments need to be made within the state’s learning model.

“This data also gives us a much clearer picture of how the pandemic has impacted different students in different ways,” said Mandy Minick, spokesperson for the ODE. “Having data like this is always beneficial when you’re trying to determine where and how to focus efforts, attention and resources.”

Those resources are under a microscope already as biennial budget discussions begin. The governor has already laid out his recommendations for the education budget in the state, though he didn’t push a change in the funding formula as a whole.

The information for the study was done while legislation was still pending that the sponsors hoped would alleviate testing metrics in schools that are typically used by the state to determine funding levels.

On Thursday, the same sponsors introduced a strikingly similar bill to the one they introduced in the last General Assembly, addressing end-of-course examinations and K-12 standardized testing requirements.

“This pandemic has put all students under a immeasurable amount of stress, even students who have been able to return (to) in-person instruction,” said cosponsor Sen. Teresa Fedor, D-Toledo. “No student should be held back or prevented from graduating because of it.”

The senate bill, also sponsored by Sen. Nathan Manning, R-North Ridgeville, would allow a waiver of state tests that are not federally required “and provide a process by which the State Superintendent can consider and accept a waiver for federal tests,” according to a release on the bill. It would also allow students to use course grades instead of exams to qualify for graduation.