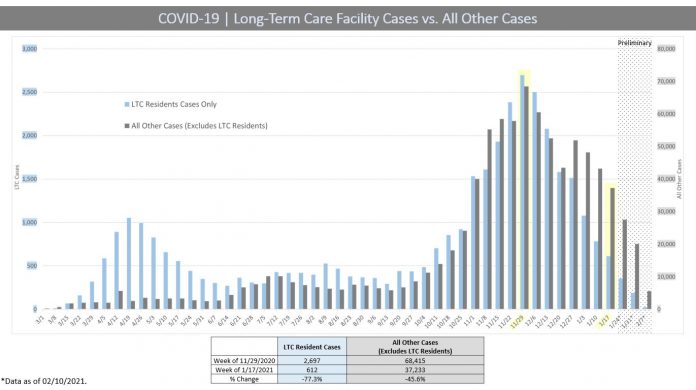 For almost a year now, Ohioans have been subjected to a relentless stream of bad news about the coronavirus.

First it was a shortage of masks, hand sanitizer, personal protective equipment and testing. Then, in December, the exciting news that a vaccine was finally here was closely followed by a botched rollout that fell far short of expectations. Then on Wednesday, Ohio health officials announced that the death toll was 4,000 — or 34% — greater than previously reported.

But through all those clouds, a few faint rays of sun are starting to peek out.

Outside of bars and some other establishments that had to close, compliance with the measure was largely voluntary. But the reasons behind allowing its expiration are at least somewhat encouraging.

At 1,862, the number of people hospitalized statewide continued a steady, downward trend stretching back to last month. DeWine’s criterion for lifting the curfew was 14 straight days with 2,500 or fewer hospitalizations — a bar that the state cleared easily.

DeWine said the drop in hospitalizations appears to be driven by the fact that the number of new covid cases among residents of long-term care facilities such as nursing homes has fallen precipitously, to levels not seen since last spring.

Given that those populations are among the most likely to become seriously ill from the coronavirus, the fact that the great majority of nursing home residents have been vaccinated appears to be reducing the number of hospitalizations.

“We really tamped the fire down in the nursing homes, and many of them are the ones who have been winding up in hospitals,” DeWine said.

Also likely contributing to a downward trend in coronavirus infections is that an estimated 30% of Americans might already have had the virus and developed natural immunity that increasingly appears to be durable.

More help appears to be on the way.

DeWine said last week that the state has the capacity to administer three times as many doses of the vaccine as the state then was getting. But that number appears to be increasing — briskly.

On Thursday, DeWine said 215,000 doses are coming to the Buckeye State this week and another 223,000 will come next week.

Also, President Biden on Thursday announced that 200 million — or 50% — more doses of the two permitted vaccines will be available nationwide, by the end of July. In addition to that, a single-shot Johnson & Johnson vaccine could receive emergency approval by the end of the month.

All the news isn’t good, however.

A big reason officials are scrambling ever faster to produce more vaccine is that they want to get them into arms before faster-spreading variants of the virus become dominant in the United States.