Coronavirus cases in Ohio, neighboring states might be inching back up

After a disastrous January, coronavirus cases in Ohio steadily marched downward. Then in recent weeks, they hit a plateau. Now, even as greater numbers of Ohioans get vaccinated, case numbers might be inching back up.

Ohio might be part of a disturbing national trend.

The Johns Hopkins University Coronavirus Resource Center published a set of graphs titled, “America is reopening. But have we flattened the curve?” They map shows trends for each state and color codes them — red for states with increasing case numbers and blue for states where numbers are dropping. How deeply shaded they are indicates how quickly cases are dropping or falling in a state.

The red in Ohio’s graph is so light that it barely amounts to a blush. More disturbing, is that every neighboring state but one is a deeper shade. Kentucky is a very light shade of blue. 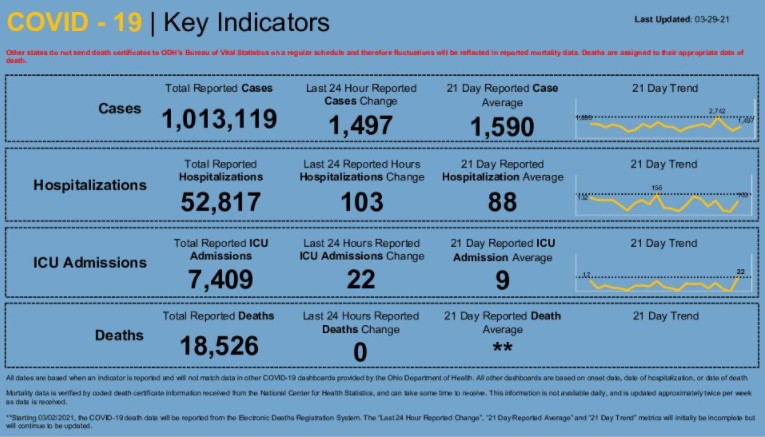 The trend extends across the country. The U.S. Centers for Disease Control and Prevention last week said that the seven-day average of coronavirus cases nationally was up 7% over a week earlier.

That prompted CDC Director Rochelle Walensky on Monday to say she felt a sense of “impending doom.”

“Now is one of those times when I have to share the truth and I have to hope and trust you will listen,” Walensky said, according to the Charlotte Observer. “Right now I’m scared.”

Those comments prompted President Joe Biden to call on governors in states that had ended their mask mandates to reinstate them.

“People are letting up on precautions, which is a very bad thing,” Biden said, according to the New York Times.  “We are giving up hard-fought, hard-won gains.”

The recent rise in cases is probably driven by several factors.

States like Texas have lifted mask mandates and indoor capacity limits. Not only does that take away tools to limit the spread of the virus, it could send a message that the pandemic is over and precautions are no longer needed.

Ohio’s mask and other orders remain in place. And Gov. Mike DeWine rarely misses an opportunity to urge the public to take precautions against the virus.

But as the weather is warming and vaccines are becoming increasingly available, people might be letting their guard down. For example, about half the clientele was unmasked on Saturday at a crowded Columbus convenience store near the softball fields at Lou Berliner Park.

Also, several new variants of the virus are spreading more rapidly than their predecessors. As they crowd out earlier versions of the virus, the spread — and mutations into even more dangerous variants — could accelerate further, experts have said.

The CDC on Sunday said that the number of cases of the “UK variant” — B.1.1.7 — had jumped 115% in Ohio over a week earlier, the Cincinnati Enquirer reported.

Also potentially hampering Ohio’s fight to squelch the disease is that the state will soon have plenty of vaccine, but millions of unvaccinated Ohioans.

Some members of minority groups might distrust the health system after a history of abuse or neglect, meanwhile racial inequities in health care access still impede care. Some people have bought into the myth that vaccines cause autism. Still others might not be able to conveniently find one.

There is also a political dimension.

After a year of former President Donald Trump making false statements about the coronavirus, an NPR-PBS-Marist poll conducted earlier this month found that almost half of Republican men said they had no intention of getting vaccinated.

While other former presidents came together earlier this month to boost the vaccine effort, Trump skipped the event. Trump and his wife, Melania, quietly were vaccinated before they left the White House in January.

It appears that many Ohioans are skipping the shot for one reason or another.

Cohorts of older Ohioans who have been eligible for the vaccine for more than a month appear to show the trend. They approach about 70% getting at least a first dose and then the increase slows to a crawl.

The most vaccinated group of Ohioans by age is now those 70-74, of whom 72% have received at least a first dose.

Coronavirus cases in Ohio, neighboring states might be inching back up

“God, no, not another case.” COVID-related stillbirths… by Duaa Eldeib, ProPublica August 10, 2022
Ohio’s fight for LGBTQ+ protections by David Rees May 10, 2022
While in effect, Ohio's abortion ban led to chaos,… by Marty Schladen November 4, 2022