A new study found that a Columbus project to help maternal and infant birth outcomes should be used more broadly to improve health access and housing.

The Health Policy Institute of Ohio was commissioned to study Health Beginning at Home, a project from 2018 to 2021 meant to “test the impact of providing rental assistance with housing stabilization services to unstably housed pregnant women at risk of infant mortality.”

The project, funded primarily by the Ohio Housing Finance Agency, was led by CelebrateOne, a collaborative in Franklin County, which randomly assigned 100 families, 49 of which received housing intervention.

“For example, the average paid per claim for infants at the time of delivery was $4,175 for the intervention group (that received assistance) compared to $21,521 for the control group, largely driven by lower neonatal intensive care unit utilization among HBAH infants,” the study stated.

Housing stability also improved under the study, which participants lacked before they began the project. Having affordable and safe housing removed one element of insecurity in the group and limited time in homeless shelters.

“Families with ongoing rental assistance (rather than time-limited assistance that ended at exit) faced a much lower threat of instability when they left the study,” according to the policy institute.

That assistance is needed because of the median hourly wages for jobs held by participants of the study. Those jobs include fast food service, home health and nursing assistance, and janitorial work. 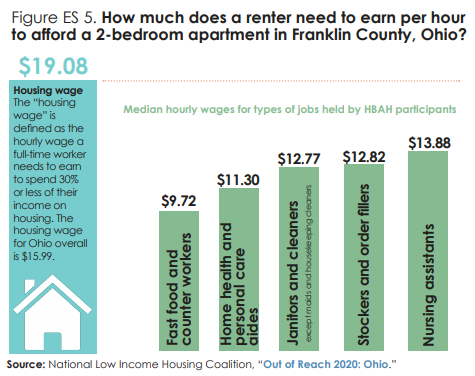 According to the National Low Income Housing Coalition, statistics from which were cited in the HPIO study, a Franklin County renter needs to earn $19.08 per hour for a full-time worker to spend 30% or less of their income on housing. In Ohio, that “housing wage,” is calculated at $15.99 per hour by the coalition.

Most participants in the study were recruited from CelebrateOne “priority ZIP codes” where high rates of infant mortality were identified. That meant that 92% of those included in the project were Black or African American, “reflecting residential racial segregation in Columbus and higher rates of housing cost burden and homelessness among Black/African American families in these communities,” the study found.

HPIO recommended that the study be replicated on a broader scale “to understand the impact of the project on health outcomes, health equity, healthcare spending and long-term housing stability.”

Policy changes on a state level that were recommended in the study included equity in housing and rental assistance, changes to improve the supply of affordable housing and increased employment and income. Along with increased wages, HPIO urged child care assistance in improving family economic stability.

An increase to Ohio’s child care subsidy eligibility requirement to 200% of the federal poverty line was part of the child care recommendations.

In the latest state operating budget, the state increased the eligibility for publicly-funded child care from 138% of the federal poverty level to 142%.

Ohio’s fight for LGBTQ+ protections by David Rees May 10, 2022
Lawmakers say they planned to fail on Strauss sex abuse… by Jake Zuckerman October 11, 2021
A boy with an autoimmune disease was ready to learn in… by Guest Author August 27, 2021