Customers look on as a Walmart cashier rings up their purchases at a Walmart store. Photo by Justin Sullivan/Getty Images.

A new study from an Ohio think tank shows disproportionate lay offs for low-paid workers, gender and race inequity, and “job destruction” as a result of the COVID-19 pandemic.

The report released this week by Policy Matters Ohio, titled the “State of Working Ohio 2021,” showed that inconsistencies in assistance from federal and state administrations limited the effectiveness of relief plans like unemployment assistance.

While the study also showed that financial injections like supplemental unemployment, aid packages and direct stimulus payments “likely prevented the recession from dragging on months longer” in the state, the fact that they were one-time deals or deals that were taken away before the pandemic’s end brought progress to an end as well.

“The pandemic remains with us,” study authors Michael Shields and Vivian Jacobs wrote. “Weeks after COVID-19 seemed to be receding as a threat, daily cases surged again, prompting renewed uncertainties about when and how we will overcome the coronavirus.”

The study said Ohio lawmakers did not help matters as they legislated away the power of public health mandates and the ability to regulate masks and vaccines.

“The consequences have been felt across Ohio, but working people, whether working on the frontlines at risk of exposure, or displaced from their jobs, have borne the brunt,” the report stated. 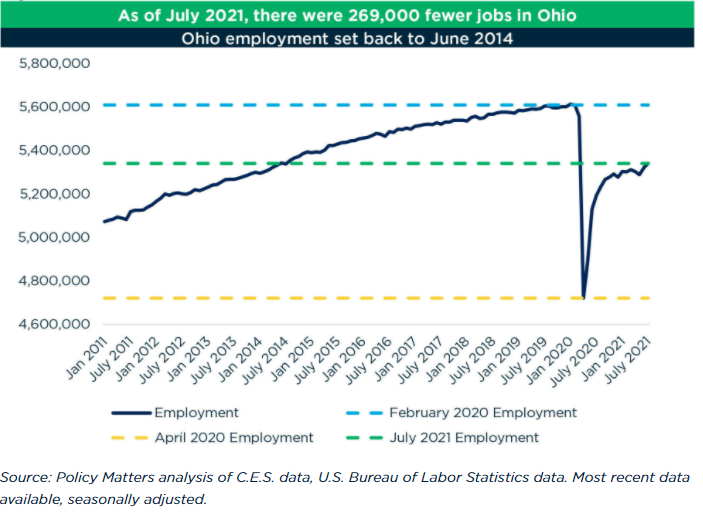 Using state and federal data, the study showed that as of July 2021, 269,000 fewer jobs existed in the state compared to February of 2020. The poverty rate in the state reached levels not seen since 2007.

Shields and Jacobs said Gov. Mike DeWine “prematurely” pulled supplemental unemployment benefits — something he’s still fighting in the Ohio Supreme Court — and that, compounded with the end of eviction moritoria, could cause more Ohioans to lose housing or be unable to pay bills.

Women faced a wage gap that had been narrowing in the years before the pandemic began, and workforce participation also fell as Ohio women left the workforce to care for children or were laid off, the report said.

“Women were more likely to have to take on unpaid care work that disrupted their careers,” the authors wrote. “This recession was distinct from the Great Recession in disproportionately harming women.”

While the Great Recession that started in 2o07 exacerbated existing socioeconomic inequity, Policy Matters said COVID-19’s fiscal effect threatened to continue that problem, and the study credits rapid recovery of corporate stock prices and real estate as a pandemic boon for the wealthiest Ohioans.

Fiscal stimulus programs, however, showed an “equitable state economy” is possible, it said.

“The unprecedented fiscal stimulus with which federal policymakers met (COVID-19) is a reminder that government is the vehicle we use to solve problems and craft better communities together,” the study concluded. “When used to those ends, it is an incredibly powerful force.”