The Ohio Senate Local Government and Elections Committee hears from the public on two redistricting proposals, one from Senate Dems and the other from the Senate GOP on November 4. (Photo by Susan Tebben, OCJ)

Because of the warp-speed introduction of GOP congressional redistricting maps in House and Senate committees yesterday, Thursday’s public testimony was mostly harsh criticism of procedure, though the day wasn’t without specific map criticisms.

Dissection of the maps introduced yesterday were similar to those given during the legislative redistricting process, and to those given of maps that are currently in place in the state.

“In my lifetime, which is just 31 years, I’ve almost never lived in a state that didn’t gerrymander my ability to vote, and that’s been Ohio,” said Jasmine Henderson, a Dayton resident and director of policy and social impact for the Ohio Women’s Alliance. 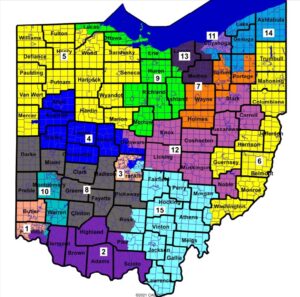 Henderson said she’s opposed to the Senate GOP map that ties Montgomery County into Warren County rather than neighboring Clark County, because it wraps together two communities with interests and socioeconomic situations that are not alike.

Montgomery is nearly 20% Black in population, and Warren County is made up of less than 4% Black population. The average median incomes in the counties are significantly different as well, which has impact on voting districts, according to Henderson.

She’s personally diligent about her voting rights because her grandmother grew up in the Jim Crow South, and was the first person to be allowed to vote.

Having the ability to vote is a “form of harm reduction to overcome oppression and practice self-determination” for Henderson’s community and those like hers.

“This legislative body doesn’t have the ability to tell me what representation looks like when I’m self-determined,” Henderson said. “It’s only job as the governing body when it comes to redistricting is to make sure that my one vote is weighted and equal to everyone else’s vote.”

The GOP and Democratic maps also got criticism from Gov. Mike DeWine, of the now-defunct Ohio Redistricting Commission. During a press conference on COVID-19, DeWine was asked about his role in legislative redistricting, in which he felt his hands were tied, but he jumped in on the congressional effort as well.

He said he’s looked over the maps proposed by both House and Senate Republicans and those of the Senate Dems, and to him, “I think it’s pretty clear, neither one of these maps is going to fly.”

A common thread between those testifying in the Senate Local Government and Elections and House Government Oversight committees was scrutiny of the fact that both GOP congressional maps came out less than 24 hours before the two meetings were gaveled in.

Blacklick resident Michael Ahern said the way in which House Bill 479, which contains the GOP congressional map, has done a “disservice” to the people of Ohio who voted to change the way redistricting was done in the state.

“The process associated with considering this bill seems to me to be extremely rushed, when it does not need to be,” Ahern said. “If you want meaningful public input which I think the reforms that are in our constitution really are driving toward in terms of process, you certainly are not meeting that bar through the process that has unfolded so far.”

Ahern joined the cry of many others speaking on Thursday who said the legislature needs to have meetings outside of the Statehouse to get truly representative voices in the redistricting process.

A criticism taken up by Democrats particularly on the House side was public access to a site on which to submit map proposals to the General Assembly. Currently, maps can be submitted through a website established when the Ohio Redistricting Commission began the legislative redistricting process.

The website’s homepage still refers to the Ohio Redistricting Commission’s task — as it was prior to Sept. 15 — as “redrawing each of those legislative districts,” which state Rep. Stephanie Howse, D-Cleveland, and other Democrats, along with some that submitted testimony during the committee hearing, said can cause confusion for typical Ohioans who want to submit maps.

“Constitutionally, the Ohio General Assembly is responsible, and this is not what the website says.”

Republicans bore down on the fact that the website was approved as the public resource for congressional redistricting as part of House Bill 92, which passed the legislature at the end of September. It was passed as an addition to a bill requiring reporting of child abuse in military families.

After several questions from Democratic representatives and a few pauses in the committee hearing during back-and-forths between the chair and Howse, committee chair Shane Wilkin, R-Hillsboro, said he would “follow up with leadership to make it clear” that Ohioans should use the redistricting website as the official submission point for maps.

Nick Evans contributed to this article.

Americans in climate-threatened regions anxious for… by Laura Cassels November 3, 2021
Trump’s fake electors: Here’s the full list by Kira Lerner February 1, 2022
A boy with an autoimmune disease was ready to learn in… by Guest Author August 27, 2021