While amendments are possible, the map is poised to pass out of a Senate committee Tuesday with a full Senate session to follow, and House sessions planned for Wednesday and Thursday.

Data behind the map were not made available Monday evening for full analysis, but it appears to show two safely Democratic seats based in Cleveland and Columbus and a majority of others being solidly Republican or leaning Republican and one district that could be a toss-up.

That district is one of three splitting Cuyahoga County, including the southwestern portions of it in a district with all of Medina County and Akron in Summit County.

Hamilton County is also split into three districts, with all of Republican Warren County connected to the city of Cincinnati and an eastern portion of the county included in a district that stretches east out to Meigs County. The map also takes a chunk out of central Hamilton County for a district that stretches along the western Ohio border from Butler up to Darke County. 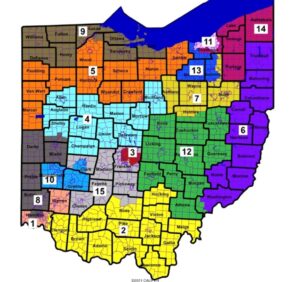 While the center of Franklin County in the map would be a safely Democratic seat, outlying areas in a C-shape along the northern, western, and southern portion would be included in a Republican-leaning district that stretches westward to Clark County and southward to include Clinton, Fayette and parts of Ross County.

The map combines Montgomery County with Greene County and the central part of Clark, creates a district that stretches from Trumbull and Mahoning counties down along the Ohio River on the eastern border to Washington County, and puts Toledo and Lucas County in with Defiance, Williams, Henry, Fulton, Ottawa, Sandusky and Erie counties.

Statehouse Republicans claim the map presents seven competitive districts and noted that it keeps seven of eight of Ohio’s largest cities whole while dividing only 12 counties.

On Twitter, a number of Statehouse Democrats panned the proposal.

Without bipartisan support, Republican legislators could vote through four-year maps. Any maps will have to be approved by Gov. Mike DeWine. If four-year maps go through, court challenges are likely.

State legislative maps passed in September by the Ohio Redistricting Commission are currently before the Ohio Supreme Court after three lawsuits were filed against them. The court has four Republicans and three Democrats. Republican Chief Justice Maureen O’Connor ruled against Ohio’s current maps in 2012, and is considered a possible swing vote.