At least 60 people packed themselves into a room that would feel full with 20 at Jane Timken’s campaign headquarters Friday. Good thing the former chair of the state GOP isn’t running for fire marshal. The crowd was an interesting mix of young and old. Many of the fresh-faced among them were campaign staffers sporting brand new “Jane Timken for U.S. Senate” t-shirts.

The Timken campaign’s biggest splash to this point in the race — aside from a tv spot flirting with PG-13 — was picking up the endorsement of Sen. Rob Portman. The outgoing Republican Senator tagged along with Timken Friday for a three-stop tour of the state.

Portman has been in office for just over a decade, but his wonky, technocratic style feels even older. He’s been a model of bipartisanship — helping negotiate last year’s landmark infrastructure package, regularly teaming up with his Democratic counterpart Sen. Sherrod Brown, and irking people on both sides of aisle. Some conservatives see Portman’s willingness to forge compromise as spineless. Liberals criticize his connection to the gun lobby and his refusal to take a harder line during Trump’s presidency.

“It doesn’t help her at all in my eyes,” one attendee who identified himself only as Joe said about Timken getting Portman’s endorsement. “He’s been there for 25 years and hasn’t done s—.”

Timken’s stump speech fills out the MAGA bingo card in a tight five. She criticizes critical race theory, invokes the war in Ukraine to demand energy independence, and even promises to “build that wall.” But the packaging is softer. Despite her references to playing college rugby, Timken’s approach is a far cry from fire and brimstone. On inflation, her pitch sounded closer to a plea.

“Everyone is seeing it, you’re all feeling it,” she said. “They’re telling us that almost every family’s costs are going up by almost $200, $300 a month. Not every family can afford that.” 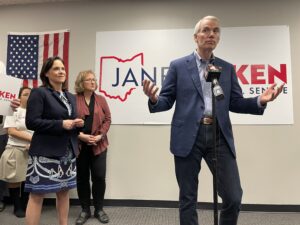 Timken’s mix of America First and more traditional Republican talking points appeals to Portman, who insisted Timken is the best candidate to win in the primary and the general election.

“Some of my Republican friends here think, ‘Oh, general elections in Ohio. We always win em.’ Not so — remember Barack Obama won Ohio twice,” Portman said. “So, Ohio is still a purple state, folks. We’ve got to be darn sure that we’re sending the right person into the general election.”

Then looking past the election, Portman argued Timken is the candidate who will get the best results legislatively.

“We’ve got to ensure that we’re sending thoughtful smart conservatives to Washington, D.C. to be able to change the current policies of the Biden administration desperately,” he said. “But also people who can figure out a way to bring folks together to get something done.”

Portman’s seal of approval is enough for Mike Chrisman.

“I like the fact that Portman chose her,” he said. “He’s my favorite guy, so that’s good enough for me. He knows her better than I do.”

Chrisman works nearby and brought his teenage son Daniel along for the event. The chief issue on his mind this election is the economy. For voters like him, Jane’s message is probably a good one — covering the waterfront of conservative issues without bluster, while hammering home the familiar small government GOP agenda.

But it’s a delicate balancing act. Are primary voters who still wrongly insist the 2020 election was stolen going to cast a vote for toned down competence, or is a bit of bluster exactly what they’re after?

At a recent event for Mike Gibbons, the candidate presented his lack of Portman’s endorsement as a badge of honor. Some of the attendees brought up the outgoing senator as an example of what they didn’t want. Other candidates throw around the RINO label so often it’s hard not to assume they count Timken or Portman among that set.

But speaking afterward, Timken argued Portman’s backing helps her appeal to a broader range of voters rather than closing off some portion of the primary electorate.

“I think I’m the candidate of addition, not subtraction,” Timken said. “I have the support of many Republicans across the spectrum and across the sphere. And as you know, President Trump supported me to be chair of the Ohio Republican Party.”

Timken has picked up Trump alums like Kellyanne Conway and more recently, Corey Lewandowski and David Bossie. The latter two come with pretty significant baggage. Lewandowski was recently ousted as chair of a Trump Super PAC over allegations of sexual harassment. Bossie helped pass the resolution censuring Reps. Liz Cheney, R-WY, and Adam Kinzinger, R-IL, over their participation on the Jan. 6 commission. That resolution described the riot as “legitimate political discourse.”

Those Trumpworld pick-ups seem like a bid to corral the former president’s endorsement, which Timken said she’d welcome. In the meantime, Timken is focused on wrangling a fractious party in crowded primary field.

Nick Evans has spent the past seven years reporting for NPR member stations in Florida and Ohio. He got his start in Tallahassee, covering issues like redistricting, same sex marriage and medical marijuana. Since arriving in Columbus in 2018, he has covered everything from city council to football. His work on Ohio politics and local policing have been featured numerous times on NPR.

Trump’s fake electors: Here’s the full list by Kira Lerner February 1, 2022
Settled into new homes, refugees in US say they are working… by Guest Author June 22, 2021
Americans in climate-threatened regions anxious for… by Laura Cassels November 3, 2021