The newest bill to regulate school curriculums and keep out what legislators see as “divisive concepts” entered the Ohio House on Tuesday.

Though the co-sponsors said they want to deputize the State Board of Education with making decisions about what those concepts would be, the bill includes “critical race theory,” a misnomer used by conservatives to refer to the teaching of race in American history, and name the “1619 Project,” a New York Times project that laid out the chronology of slavery and racism, as concepts that would be prohibited under the bill.

“Diversity, equity and inclusion learning outcomes” (DEI) are also named as “divisive or inherently racist concepts” under the bill. When asked to explain DEI and why it’s being prohibited, Loychik connected DEI to “critical race theory,” saying the two are connected based on research he and Schmidt had made.

“The word ‘critical race theory’ was not very well accepted at that point in time, so it was re-developed into DEI – diversity, equity and inclusion – and based off our research, like I said before, it’s very, very similar to the teachings under critical race theory,” Loychik told the committee.

DEI trainings have been used in schools to train employees about learning disparities that can happen in education.

Part of the bill prohibits teaching kindergartners about topics related to gender.

“It ensures that sexual orientation and gender ideology are not taught in kindergarten through third grade,” Loychik said. “Starting in fourth grade it must be age appropriate.”

Loychik has made his feelings on gender in schools clear through posts on his Twitter, in which he said “the left thinks a 6-year-old should be able to change their gender but an 18-year-old shouldn’t be able to buy a firearm,” and asks for support not to allow “teaching transgenderism or allowing teachers to discuss their sex life with kindergarteners.”

Under the newest bill, the State Board of Education would also be required to “establish a procedure by which individuals may file complaints against a teacher, school, administrator, or school district superintendent alleging a violation of the bill’s prohibitions and to adopt rules to govern the implementation of and monitor compliance with the bill’s provisions,” according to Legislative Service Commission analysis of the bill. 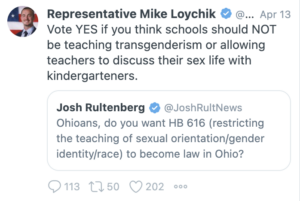 Democratic committee members pushed back on the bill’s language, decrying it as “censorship” and questioning the vague language used, and the state board of education’s role in defining the off-limits topics in school curricula.

The co-sponsors said they would be willing to consider amendments to the bill, but said the focus of the bill is on curriculum, not disciplinary regulations or hallway disagreements.

Loychik said the school district’s role would be to address disciplinary problems, and “hall monitors” could deal with school-day disagreements regarding “divisive concepts.”

Schmidt said “invited guests,” such as state legislators, would be allowed to “talk about what they want to talk about,” because it’s not a part of the curriculum, answering a question from state Rep. Tavia Galonski, D-Akron.

“There is a lot to discuss in the schools, and by no means would any kind of prohibition or any type of censorship be the answer for it,” Galonski said.

Education groups like Honesty for Ohio Education have criticized the bill as a “nationally coordinated educational gag order.”

This is the third “divisive concepts” bill to come through the Ohio legislature, with the last bill receiving heavy criticism after one of the co-sponsors said equal time should be given on both sides of Holocaust lessons. Neither bill has passed through the General Assembly.