As Ohio students head back for a new school year, they go back to teachers whose average pay hasn’t changed much since before high school seniors were born.

A study by the national Economic Policy Institute showed average weekly wages for teachers have stayed “relatively flat” since 1996, in data adjusted for inflation.

In a time when teachers are asked to do more than just teach lessons in classroom, and when curricula are scrutinized and districts could allow instructors to carry weapons during the day, Ohio teachers are still pushing for the resources to continue their careers.

“Between the fact that you can get paid a lot more money working in another career field and the constant attacks from extremist politicians … it’s no surprise that we’re seeing far fewer Ohioans entering the profession than even a few years ago and we’re struggling to keep many highly qualified, experienced teachers in this career,” said Ohio Education Association President Scott DiMauro, in a statement on the EPI report.

Nationally, teacher pay was bumped only $29 from 1996 to 2021, compared to a jump of $445 per week in average wages for other college graduates in that same period, according to the EPI study, which used data from the Bureau of Labor Statistics.

In Ohio, the Columbus Education Association, representing about 4,500 teachers and other staff and the city’s school district, recently announced a strike for fight for “safe, properly maintained, fully resourced schools,” according to CEA spokesperson Regina Fuentes. 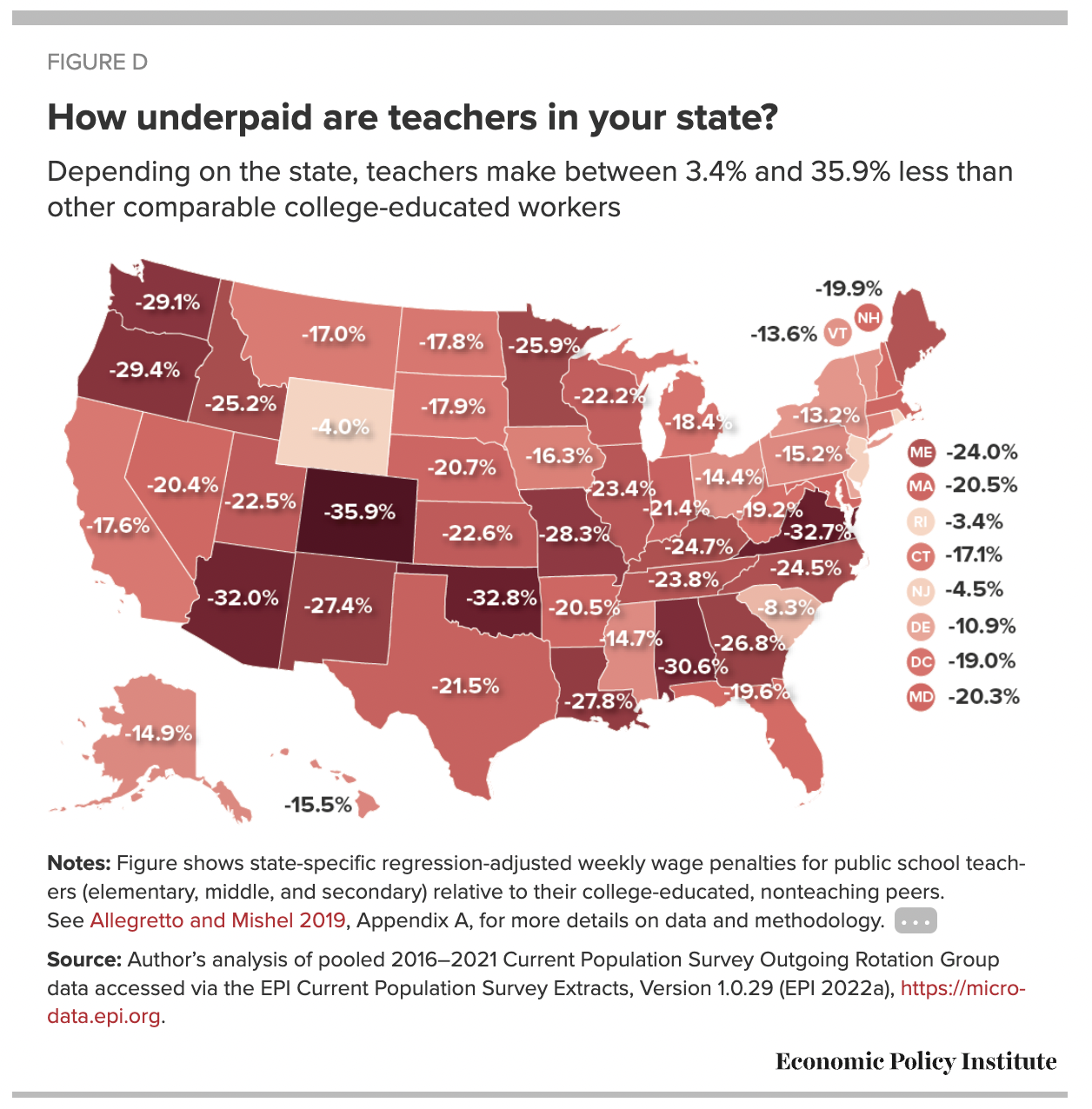 Ohio teachers have seen what EPI calls a “wage penalty,” meaning a lower wage compared to others with the same or similar education and experience. That penalty amounts to 14.4% lower wages for teachers in the state.

“The wage penalty for teachers overall hit record levels in 2021,” the EPI stated in the study. “When we break it down by gender, we see that both men and women faced record-high wage penalties for choosing teaching as a career.”

DiMauro said the report should “sound the alarm” for legislators and employers on the need for better incentives for teachers, and more resources to recruit and keep teachers in Ohio school districts.

Researchers concluded the report warning of education students forgoing a public school teaching career “in lieu of a better-paying career choice” and parents discouraging college-bound students from considering teaching as a career.

“Without targeted and significant policy action — not just on teacher pay but on school funding more generally — there can be no reasonable expectation of reversal in sight for pandemic-stressed schools and those who serve public education,” the study stated.

Ohio has seen an ongoing battle over public and private education, with unions like the OEA and the Ohio Federation of Teachers pressing for increased public school funding in a state-funded formula that addresses the needs on a district-to-district basis.

Teachers unions and public school advocates have also decried efforts to increase private school funding through the EdChoice private school voucher program and a religious-lobby backed, so-called “backpack bill” that would fund students individually, to allow them to go to any school in the state, public or private.

A coalition of school districts in Ohio and public education organizations have joined in a Franklin County Common Pleas Court lawsuit in an attempt to stop the state from funding private school vouchers.