Oil and gas well on a ridgetop in Eastern Ohio. These wells engage in the controversial practice called fracking to extract oil and natural gas. Getty Images.

A decade after the start of Ohio’s shale gas boom, counties with the most oil and gas production continue to have higher-than-average unemployment rates.

A review of state data shows that unemployment rates in Belmont, Carroll, Guernsey, Harrison, Jefferson, Monroe, and Noble Counties have exceeded the statewide average every year since 2010, casting doubt on the view that the shale gas industry would be a game changer for jobs in Appalachian Ohio. 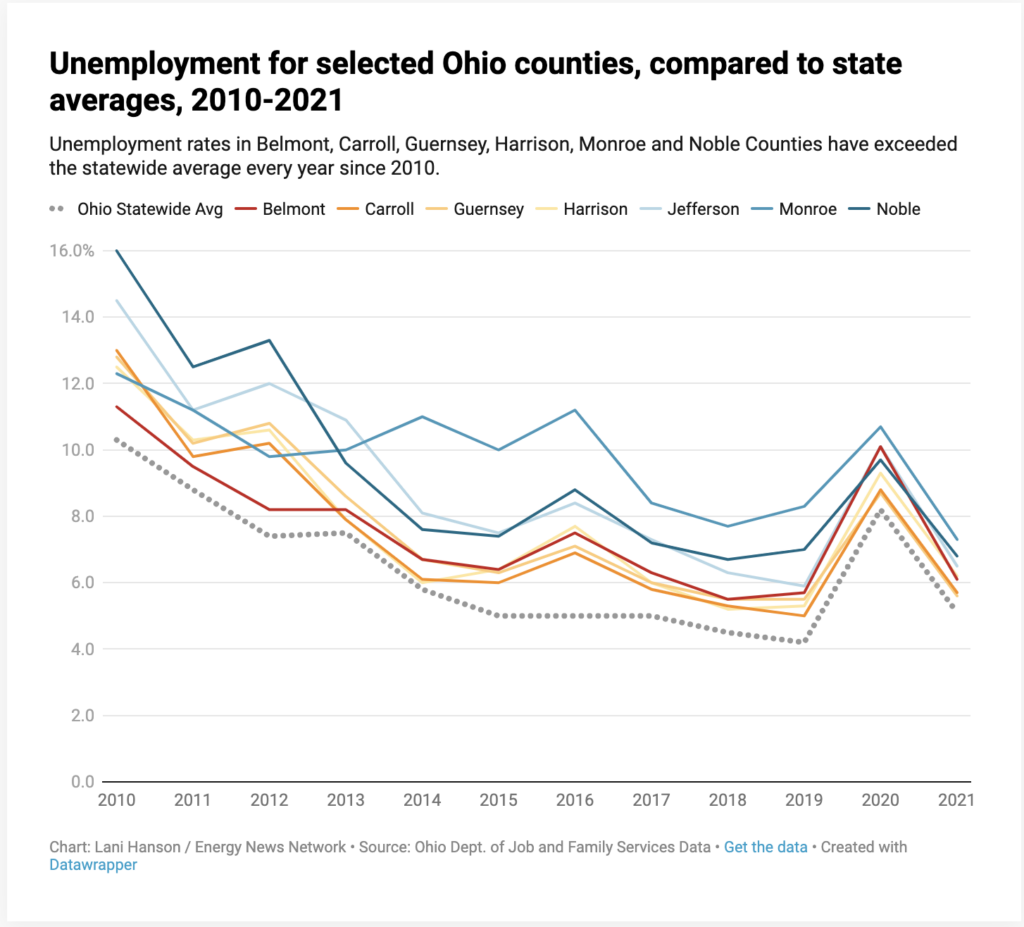 A report commissioned by the industry-funded Ohio Oil and Gas Energy Education Program predicted in 2011 that the shale gas industry would create or support 204,000 jobs as soon as 2015.

Annual reports by the Ohio Department of Job and Family Services, however, show a net increase of less than 21,000 jobs in core and supporting industries since a 2012 law opened Ohio to widespread development of fracked, horizontal wells.

Even with the jobs that were added, the top-producing counties still have higher unemployment rates compared to the state overall. The Energy News Network interviewed more than a dozen experts and local sources and heard four recurring explanations for the disparity.

Oil and gas drilling jobs are similar to construction in that the work tends to be temporary and often performed by workers who travel from one job site to the next.

“Our crews move from one well pad to the next, so the jobs follow the rigs; same with pipelines,” said Mike Chadsey, spokesperson for the Ohio Oil and Gas Association.

The amount by which the fracking counties’ unemployment rates exceeded the state average shrunk in some years, likely reflecting increased drilling activity. Initially, for example, there was a lot of industry activity in Belmont County, said Matt Coffland, who was a Belmont County commissioner in 2012. But “right now, it’s not happening.”

Once wells are producing, there’s much less work to be done, and thus fewer jobs. Meanwhile, many temporary jobs were filled with out-of-state workers, especially in the early years.

In-state training has since ramped up. “Everyone has a job when they graduate,” said Ed Mowrer, who heads up Belmont College’s Energy Institute in St. Clairsville. Still, more than half of new hires last year in Ohio’s core shale industries came from out of state, according to the annual shale report.

2. Not all jobs are where the drilling is

The Ohio Department of Job and Family Services estimated about 8,600 people worked in core shale-related industries in 2021, with another 184,000 working in “ancillary” industries ranging from trucking to engineering.

Many of those jobs, particularly in ancillary fields, are not necessarily based in the same place as the drilling. Metropolitan areas such as Cleveland, Columbus, and Canton claimed some of the added white-collar jobs. Others are spread broadly.

For example, less than 2% of Ohio’s freight trucking jobs in the ancillary categories are based in the seven highest oil- and gas-producing counties, federal data show.

3. Infrastructure and workforce support are lacking

From reliable broadband access to wide, well-maintained roads, Ohio’s top oil and gas counties still lack much of the infrastructure that many employers consider a prerequisite before opening facilities.

“The infrastructure isn’t there,” said Amy Rutledge, a longtime Carroll County resident who led its convention and visitors bureau until 2020. Many businesses expect fast internet, reliable cell phone service, and quick access to interstate freeways. But while I-70 and I-77 cross the seven-county region, Carroll County has no four-lane roads, she said.

Norm Blanchard, economic development director for the Cambridge-Guernsey Community Improvement Corporation, said the area also lacks affordable housing, as well as sites for new businesses. “A lot of our area is low, or it floods, and there are mines under everything,” he said.

A lack of workforce support presents further barriers to employment. “If you don’t have a strong child care provider system and you don’t have strong public transportation, you’re going to struggle putting people to work,” said Sue Thomas Sikora, assistant director for Guernsey County’s Department of Jobs and Family Services.

Industry money has helped build new schools in places like Carroll County and Jefferson County. Owners of leased land and local governments have also benefited from industry money. But that may not be enough.

“Many of these counties also need better access to healthcare, early childhood education, job training programs, and investments that capitalize on their natural resources — not just extract them,” said Amanda Weinstein, an economist at the University of Akron. Her research has found that “jobs are generally following people to nice places. This is leaving places with lower quality of life with fewer job opportunities.”

4. Declines in other industries continued

The rise of Ohio’s shale industry coincided with the ongoing loss of coal jobs and manufacturing work. Coal mining employed fewer than 300 people in Ohio in the first quarter of 2022 — less than one-tenth as many as in 2012. And Monroe County lost about 600 jobs in 2013 when Ormet Corporation shut down its aluminum smelter in Hannibal, Ohio.

Monroe County Commissioner Mick Schumacher said oil and gas jobs helped some displaced workers stay in the area. But those other job losses have still taken a toll.

Large manufacturing operations that would use the area’s wet gas haven’t moved in yet, either. A proposed PTTGC America petrochemical plant for Belmont County was announced in 2015. But “there is no timeline for a final investment decision” by the company, said spokesperson Matt Englehart at JobsOhio, which has spent roughly $50 million on the proposed site.

Even with more money flowing into the counties from the oil and gas industry, the population in the counties has declined. And with fewer people in the workforce, the counties also have fewer total jobs than a decade ago, the Job and Family Services data show. So the work opportunities in the counties may be worse than suggested by the unemployment rates, said Sean O’Leary, a senior researcher for the Ohio River Valley Institute.

“Not only are you losing jobs. You’re also losing your talent pool,” O’Leary said. “You’re losing your workforce, which makes it harder in the long run to rebuild your economy.”

Oil and gas is “just one of many industries,” Chadsey said. “We’re a lot of things, but we’re probably not the answer to everything.”

This article first appeared on Energy News Network and is republished here under a Creative Commons license.

Kathi is the author of 25 books and more than 600 articles, and writes often on science and policy issues. In addition to her journalism career, Kathi is an alumna of Harvard Law School and has spent 15 years practicing law. She is a member of the Society of Environmental Journalists and the National Association of Science Writers. Kathi covers the state of Ohio.