Tommy Greer, 34, fishes in the Cuyahoga River with a background of downtown Cleveland in this file photo. (Photo by Jeff Swensen/Getty Images)

Cleveland had the highest poverty rate among large U.S. cities in 2019, overtaking Detroit, according to data released by the U.S. Census bureau last week. The data for the ranking is from 2019, before the coronavirus pandemic exacerbated problems related to poverty in Ohio and around the country.

The Cleveland-based Center for Community Solutions reported in a post Monday that although Cleveland’s overall poverty rate fell from 33.1% to 30.8% from 2018 to 2019, Detroit’s rate fell faster and is now just barely below Cleveland’s at 30.6%.

“These estimates are close enough to be within the margin of error — but no matter the rankings, it is clear that Cleveland is a high-poverty city,” the Community Solutions center noted in the post.

Cleveland remained dead last among large cities in child poverty, with 46.1% of children in the city living in poverty in 2019.

“More than 6,500 of those adults in poverty in Cleveland worked full-time for the full year, but did not earn enough to propel them above the poverty threshold,” the post noted.

The post said the 2019 data shows a continuation of another concerning trend: an increase in poor seniors. The number and share of people over age 65 who live in poverty grew in Cleveland to 22.7%. Meanwhile, Detroit’s senior poverty rate fell to 18.8%. Cleveland rose one spot from being third-worst in older adult poverty to second, tied with Boston, Massachusetts,  and Tampa, Florida. Only Miami, Florida is worse.

As shown below, poverty estimates fell for all other age groups between 2018 and 2019. 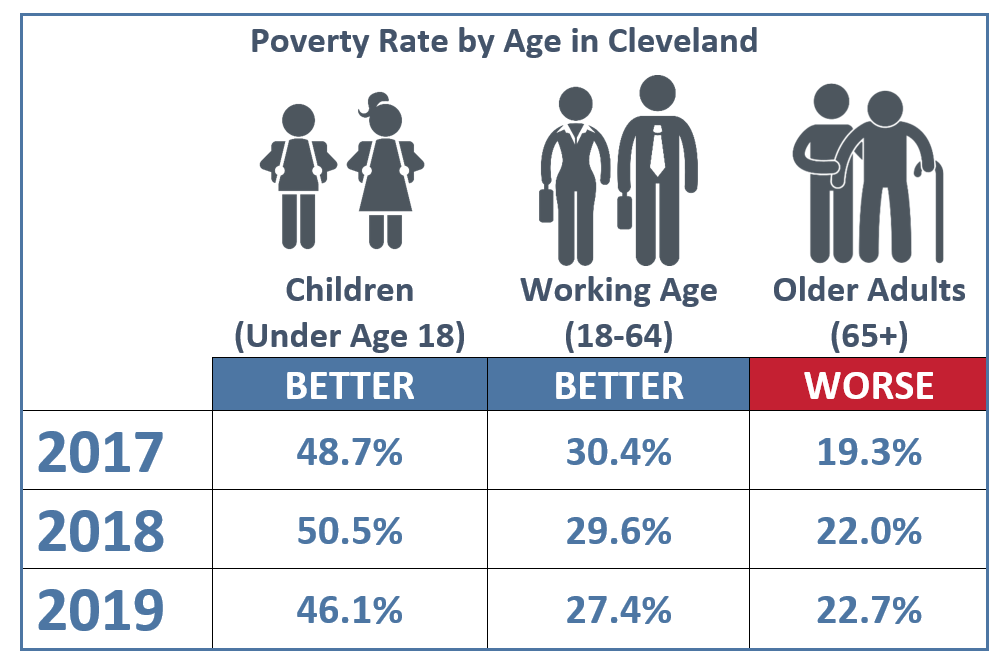 “These changes are not statistically significant, and the data was collected in 2019, well before the COVID-19 pandemic and its resulting economic downturn,” the post noted.

Ohio is the only state with more than one city with a population of more than 300,000 in ranking in the top 10 poorest big cities with Cincinnati maintaining its ranking at sixth. 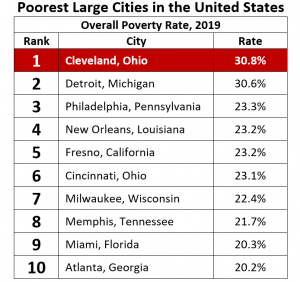 “Even before COVID-19, this data shows that thousands of our neighbors struggled last year during a time of record unemployment,” the post said. “Today, there are more than twice as many unemployed people in Cuyahoga County as there were a year ago when this data was collected.”

About 40% of Ohioans report either they, someone in their households or both have lost a job since March 13.

“Early information suggests that federal assistance, such as stimulus payments and extra unemployment benefits, kept many of those people from falling into poverty during the first months of the pandemic,” the post concluded. “But as that extra help expired over the summer and thousands of Ohioans are still unable to find work, we suspect that poverty may rise quickly. Similar data for 2020 will not be available until next fall.”