Illustration by iStock / Getty Images Plus.

Before the coronavirus hit Ohio, only three out of the 10 most common jobs actually paid employees enough to afford a basic two-bedroom apartment, according to a report released Tuesday according to a news release from the Coalition on Housing and Homelessness in Ohio (COHHIO).

“Today, many of those workers have been laid off and are now facing eviction,” the release said.

Ohio’s Housing Wage — the hourly amount renters need to earn to afford a basic, two-bedroom apartment — increased this year to $15.99, according to the Out of Reach report jointly released by the National Low Income Housing Coalition (NLIHC) and COHHIO. Minimum wage employees would need to work 74 hours a week year-round to afford a two-bedroom unit, the release said. 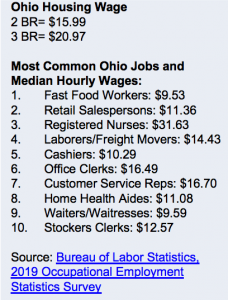 “Of the 10 occupations with the most employees in Ohio, only registered nurses earn considerably more than the housing wage,” the release said. “Meanwhile, people working in common jobs that pay far less than the housing wage — fast food workers, retail salespersons, cashiers, restaurant employees, and janitors and cleaners — are the most likely to have been laid off or lost income as a result of the coronavirus pandemic.”

Meanwhile, the U.S. Census Bureau’s most recent Household Pulse Survey estimates nearly 537,000 Ohioans are concerned that they will not be able to pay next month’s rent, it added.

COHHIO Executive Director Bill Faith said mass unemployment among Ohioans who were already struggling to pay the rent has created the very real prospect of a full-blown housing crisis on top of a public health emergency.

“Local organizations throughout Ohio are trying to help unemployed workers keep a roof over their heads, but the demand for rental assistance is immense and growing every day,” Faith said. “We need state and federal leaders to do their part to prevent unnecessary evictions and homelessness. Safe, decent, affordable housing must be a priority, especially during a pandemic when your health really depends on having a home.”

COHHIO and NLIHC are urging the U.S. Senate to pass Sen. Sherrod Brown’s (D-Cleveland) proposal to create a $100 billion emergency rental assistance program for workers impacted by the virus-induced recession.